By Ben Wyatt and Paul Gittings 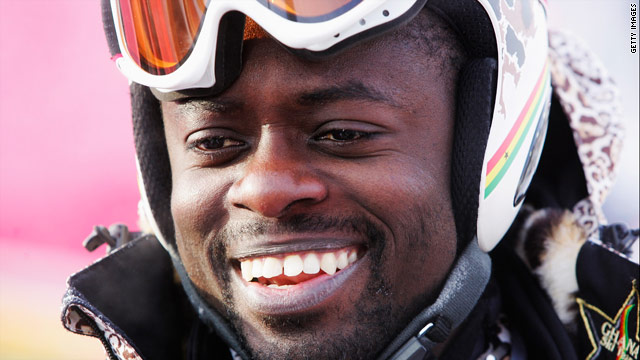 Kwame-Nkrumah Acheampong is all smiles as he contemplates his moment of Olympic destiny on Saturday.
STORY HIGHLIGHTS
RELATED TOPICS

(CNN) -- Despite the adversity faced by competitors living in areas of the world where sub-zero temperatures are uncommon, the history of African athletes competing at the Winter Olympics is surprisingly rich.

Finding areas suitable to practice disciplines such as alpine skiing, figure skating and giant slalom can be hard enough for athletes hailing from a region known for its high average temperatures and sunshine levels, let alone for those trying to attain the high standards of performance needed to qualify for Olympic competition.

The Winter Games has seen a further chapter added with Ghana's one-man ski team, or Kwame-Nkrumah Acheampong as he is otherwise known, qualifying to compete in the Canada showpiece.

The 33-year-old, who grew up in Accra, will be the first to represent the Black Star nation on the slopes when he takes part in Saturday's slalom event at Whistler Creeekside and the fact he will be there at all is testament to the natural ability and determination of the man dubbed the 'Snow Leopard'.

Acheampong only strapped skis on for the first time in 2003 after moving to Britain where he got a job at an indoor ski-slope in southern England.

"I began skiing at the ski center and took a few lessons as they were free for staff. But I quit my job when the love affair with skiing grew because I felt I had a good chance of making it professionally," he told CNN.

His dream of qualifying for the Winter Olympics, a feat that required the plucky navigator of the piste to set up the first Ghanaian Ski Team, came true after six years of struggle.

The Snow Leopard prepares for the Winter Games

"It's like a heavy burden lifted off my shoulders and I think it will be the best fun I'm ever going to have skiing," said Acheampong, who has become something of a celebrity at the Games with plenty of interest from a media looking for stories with a difference.

The Snow Leopard is hoping that his performances and the publicity he has generated in Canada will inspire youngsters in his country to take to snow and ice.

"What I hope to achieve 10 years from now is for Ghana to have a ski racer who is 10 times better than me. I want to build a slope in Ghana -- it will be a grass slope, an artificial kind -- something simple, to get the youngsters getting into the idea of skiing, snowboarding," he said.

Acheampong is just the latest in a growing line pf pioneering athletes from the continent who have defied the odds to take part down the years.

Though the first Winter Olympics took place in Chamonix, France in 1924 Africa had to wait until 1960 for its first competitor to participate. It was in this year that South African figure skaters broke the continent's duck by traveling to the Squaw Valley, in the United States for the eighth edition of the event.

Of the four athletes that took part, Gwyn Jones -- a 20-year-old male who competed in the mixed pairs figure skating -- was by far-and-a-way the eldest of a remarkably young team. Marion "Penny" Sage (16), Patricia Eastwood (12) and Jones's skating partner Marcelle Matthews (11) were the female trio who completed the pioneering quartet who placed Africa on the icy Games' map for the first time.

Though Jones and Marcelle missed out on the medals by some way, finishing thirteenth, while Sage and Eastwood finished 23rd and 25th respectively, an important step had been made for the continent; though IOC condemnation of the apartheid regime would ensured the rainbow nation would not compete again until 1994.

The 1984 Games in Sarajevo, Yugoslavia proved a breakthrough year for Africa. Senegalese skier Lamine Gueye, became the first black African to take part in the Winter Olympics. Having founded the Senegalese Ski Federation (FSS) in 1979, Gueye -- who was named after his politician grandfather -- went onto finish 14 seconds behind the winner in the downhill in 1984 before going onto represent the west African nation in the event a further two times, in 1992 and 1994.

Gueye, along with his Olympic appearances, went onto to become an outspoken critic of the IOC's policy to limit the amount of competitors smaller countries can submit and to this day argues the cause for more participation from his home continent. The move, which came into force in 1992, is "in complete contradiction with the Olympic Charter" according to Gueye and represented an unacceptable form of "racial discrimination".

One of the most unlikely nations to compete at the Winter Games has been Kenya, but there are few stories as compelling as that of former middle-distance runner Philip Boit. The brother of Olympic bronze-medal winning 800m runner Mike Boit, the skiing Kenyan made his debut at the Nagano Games in 1998, where he finished 92nd and last in the 10k cross country event.

Despite his finish, Boit's tenacity impressed gold medallist Bjorn Daehlie -- who with his victory that day became the first man to win six gold medals at the Winter Olympics -- so-much-so that the Norwegian legend delayed the medal presentation ceremony so he could embrace Boit as he crossed the line. Boit told the BBC in 2002 the meeting had a great effect on him.

And no mention of an African history at the Games would be complete without including the feats of Cameroon's Isaac Menyoli. The skier took part in the 15k cross country and 1500m sprint races in 2002 and, though his finishing placements of 83rd and 67th (one place behind Boit) respectively did not trouble the podiums in Salt Lake City, Menyoli had a greater purpose for his participation; AIDS education.

The architect, who studied in Wisconsin, had been shocked when, on a visit home to the town of Buea, he was confronted with a community ravaged by AIDS. Though aid workers were teaching the message of prevention, Menyoli found that most locals trusted foreigners more readily when they said that HIV was not a lie or a conspiracy but a fatal disease.

This gave him the idea to try and qualify for the Olympics so he would have a platform to spread the message the behavior in Cameroon needed to change to halt to increase of HIV infection." I want to ski for a reason," he said at the time. "I want to tell people that they really have to watch out, that AIDS is serious."

Menyoli's tale is just one of many, too numerous to list comprehensively here, that have shown the Winter Olympics to be a tournament where Africa has defied the odds to have a presence.

The progress of the Snow Leopard will be keenly followed as he pits his skills against the elite of world skiing, but he will lack nothing in determination as he carries the flag for Africa.