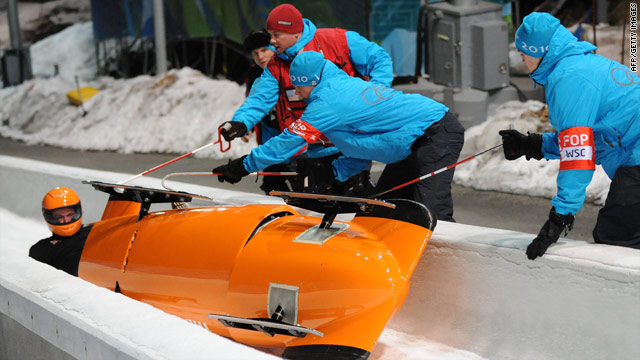 (CNN) -- Tom de la Hunty took Dutch bobsledder Edwin van Calker to the Whistler Sliding Center track one last time Tuesday and asked his driver if he could do it.

He wasn't asking him to win; he was asking him whether he could compete. The coach and his pilot walked the course, and de la Hunty told van Calker to think about it, giving him an hour to make a decision.

Time offered no healing. Van Calker told his coach he just couldn't drive this track and so on Wednesday the four-man No. 1 sled from the Netherlands pulled out of the Olympics.

Because their driver was terrified.

"I've never seen someone get to a major event and not compete because they're scared. You keep your inner fears to yourself and do it," de la Hunty told reporters at a news conference. "That's why it's such a popular sport in the military. It's that kind of macho sport. You go over the top together."

Van Calker, ranked 11th on the World Cup four-man tour, crashed on his first run during two-man practice on Saturday. That and the memories of other crashes, including one that resulted in two teammates in the hospital, were too much for van Calker.

He never felt comfortable on the track during the two-man competition when he and teammate Sybren Jansma finished 14th. He and the rest of the four-man team were absent from two training runs on Tuesday, as he struggled with what to do. It didn't help that eight sleds crashed on that first day of training.

And so that night, he made the decision to give up.

It's not about performing. It's about surviving.
--Edwin van Calker
RELATED TOPICS

"I have to look after my boys and can't close my eyes to that," he told reporters. "For me, it's not about performing. It's about surviving."

It was a split decision among the team to quit the games, said de la Hunty, who talked about how he told his driver he was making a choice he would regret forever.

"I've told him that to his face,"de la Hunty said, "but as a coach I have to support it because I'm responsible for him sending his team down the track in the right frame of mind."

For Timothy Beck, who wanted to continue, it was a heart-wrenching outcome to his last Olympics.

The man who carried the Dutch flag in the opening ceremonies said there was no tension on the team, but he wasn't the one looking out for three teammates.

"If you ask me if I want to slide I'd say, 'Yes'. But I don't have to steer; I just get in the back and go down. I don't have the responsibility," said Beck.

But he also said he was upset that he'd come to his third Olympics and would not get a chance to compete.

"This was my last chance to do something special," said the 33-year-old, who competed in the 2002 Winter Olympics and the 2004 Summer Olympics on the track team.

Jansma said he was frustrated because he wanted to show the world the progress the Netherlands has made in bobsled, but safety was paramount.

Arnold van Calker, the fourth member of the team, supported his brother's decision, pointing to the difference in the size of the two- and four-man sleds. The two-man sled is smaller and easier to control. Arnold van Calker, who had his doubts about the safety of the track, worried his brother had lost his nerve and wouldn't be able to steer the big sled through turns 11, 12 and 13.

Not even changes to the track on Tuesday could help reassure the brothers.

"It was a lot better, but for us it was maybe too late," Arnold van Calker said.

De la Hunty pinned some of the blame on Arnold's wife, saying that she had been worried about her husband's safety ever since Georgian luger Nodar Kumaritashvili had crashed and died on the same track during the first day of the games.

"When Arnold is scared and upset, obviously it has influence," he said.

But Arnold van Calker said the death had no influence, and Edwin van Calker agreed that the track was not to blame for his decision.

"It's a challenging and exciting track. You have to deal with it as a pilot. That comes with the job. Sometimes you deal with it less good," he said. "It's nothing to do with the track, just my lack of confidence at the moment."

Competition in the four-man competition starts Friday with the medals decided on Saturday after the last of four runs.