Olympian's strength built from life on the streets 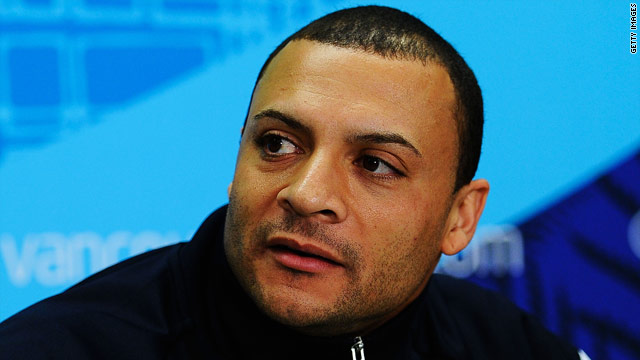 Vancouver, British Columbia (CNN) -- Many kids dream of being in the Olympics one day. When U.S. bobsledder Bill Schuffenhauer was a child in Salt Lake City, Utah, he had no idea the Olympics even existed.

All he knew was his parents were drug addicts, that his mother was a prostitute who was often beaten in front of him. He knew that if he was going to survive, he had to do whatever it took to make it.

He stole from people; he ate from garbage cans; he got locked up in juvenile detention for breaking into a bike shop when he was trying to get something he could sell for money so he could eat.

He had few friends, most of them acquaintances of his mother or the other street kids, many of whom were in gangs. His mom and stepfather were constantly getting evicted. When he wasn't homeless and living in a park, he lived in foster homes. He skipped school a lot. He drank and got high on weed.

Life was hard and at times terrifying, and he dreamed of finding a real home.

"I knew that there was something better," Schuffenhauer, 36, said last week as he readied for his third Olympic Games. "And although there were a lot of horrible things that happened, it's made me a stronger person."

Just around the time he was entering junior high, Schuffenhauer's maternal grandmother, Sadie Muniz, took him. She lived in the town of Roy, Utah, about 30 minutes north of Salt Lake City. As tears began to build, he talked about her steadying influence and how she was always there to pull him up or pull him back when he started messing up again.

"She reminded me to never give up and always push on," he said.

Inspired by her, he began to go to school regularly, even though this multi-ethnic kid stuck out because of his big afro and his shabby clothes. He had one thing that helped him fit in. He could run fast. Something he had relied on to escape the dangers of the streets -- and the cops -- would lead him away from his terrible past.

Track and field was to be a turning point; he had real friends now and the parents of one of his teammates eventually would adopt him. His coaches told him he had the talent to be an Olympian. Fueled by that dream, he worked hard in school and in becoming a decathlete. He went to Weber State University and while there he won the junior nationals in 1992.

In 2000 he was preparing for the Olympic trials when his track career came to a painful end. An oft-injured ankle failed him again, and hurting so bad he couldn't walk, he had to give up on his dream of going to Sydney.

He was crushed, but as he will often remind you, his upbringing, or lack thereof, taught him to be strong.

His conversion to bobsledder came thanks to a friend who told him there was a new track in Park City where the U.S. team was training for the 2002 Winter Olympics. He went down there to check it out and kept going back until the bobsledders noticed the 6-foot, 200-pounder and asked him if he wanted to try out as a pusher.

He joined the team and raced periodically but wasn't a regular member until fate seemingly stepped in. One of the Olympic team members on the top U.S. four-man team tested positive for steroids, so Schuffenhauer was called into duty. That crew, piloted by Todd Hays, won a silver medal at the Salt Lake Games.

Schuffenhauer retired from bobsledding after the 2006 Torino Games, where he was part of the two-man team that finished 14th. He had two children and a girlfriend, Ruthann Savage, whom he met in 2004, and he felt responsible for them. Supporting a family on the meager money bobsledders get was impossible, and it was time to find a job and settle down in Utah. That worked for two years, until the desire to compete came back when he saw the team racing at Park City. He became obsessed with going to Vancouver.

He and Savage had to solve a dilemma: either he would give up on the idea of another Olympics or he would go back to full-time training with the team. It was a risky move; if he left he wasn't guaranteed a spot on an Olympic sled. Now in his mid-30s, he'd be challenged by pushers much younger than him.

"It's been amazing that she's been able to stand by me," he said of Savage, now his fiancée. "She's the financial supporter of my life. She's having to sacrifice to make my dreams come true."

Video: Bode Miller wins gold
The dream is happening right now. I'm here. That's all I wanted. It would be nice to get a medal of any color.
--Bill Schuffenhauer, ex-homeless Olympic bobsledder
RELATED TOPICS

But Savage is a nurse, and her salary wasn't enough to pay the mortgage on the home they bought shortly after they first met. They weren't able to pay the loan on one of their cars either. The bank kicked them out, and Savage and the kids moved into a rental while Schuffenhauer went away for seven months at a time.

Schuffenhauer tried raising money from sponsors. The owners of the store where he was caught stealing as a youth offered him one of their bikes to raffle off. But with the economy in free fall, he barely sold any tickets. There are still tickets available on his Web site, billschuffenhauer.com. And other companies didn't have the extra funds to give.

It got worse. At the beginning of the 2008-2009 season, Schuffenhauer suffered a serious injury, two herniated disks in his neck, that made it difficult to use his arms to push the sled. He remained resolute that he would make the Olympics even though he was now an alternate. He worked closely with a chiropractor and a team physician to get back on track.

In January, a healthy Schuffenhauer and his USA3 teammates went to a race in St. Moritz, Switzerland, with a very outside chance of qualifying for the Olympics. They finished sixth in the event, and Schuffenhauer's dream was realized.

"The dream is happening right now. I'm here. That's all I wanted," he said. Then he added, "It would be nice to get a medal of any color."

It is improbable his team will medal in the four-man competition, which begins Friday. But Schuffenhauer has faced improbable many times before.

And even though many people come up to him to tell him how he is a hero, he can't see it that way. He figures himself just a regular guy who had a goal and was able to achieve it. Heroes are teachers and doctors, he said.

After the Games, Schuffenhauer plans to return home, find work, take online classes towards a sports science degree and move to the next chapter of his life. Asked if those chapters will take written form one day, he said he had considered it, but right now he has a family to return to.

And family is what matters most of all.