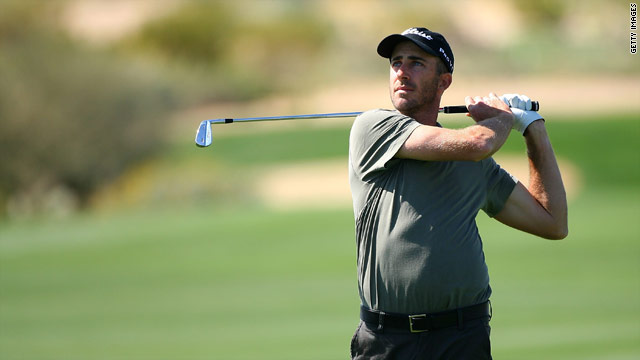 Defending champion Ogilvy battled bravely against Camilo Villegas but went down to a second round defeat.
STORY HIGHLIGHTS
RELATED TOPICS

(CNN) -- Defending champion Geoff Ogilvy and the remaining top seeds all crashed out in the second round of the WGC-World Match Play Championship at Dove Mountain in Arizona on Thursday.

Australian Ogilvy was 1-up on Camilo Villegas of Colombia through 14, but Villegas birdied the next two holes and closed it out on the 17th for a 2&1 victory.

"Geoff is a great player and obviously he has a great record in this tournament," Villegas told the official PGA Tour Web site.

"And he beat me last year. Funny enough, as players, we don't forget those things."

Top seed Steve Stricker exited in the first round and England's Lee Westwood, Jim Fuyrk of the USA, German Martin Kaymer and Northern Ireland's Rory McIlroy, seeded second through to five all went out in the last 32.

It left Paul Casey, one of four Englishman enjoying victories, as the highest seeded player at six and he beat Canadian Mike Weir, 5&4.

Furyk was beaten by Charl Schwartzel 3&2, the same margin of victory for Tim Clark over Kaymer.

England's Oliver Wilson, who has yet to win a major professional tournament, shocked McIlroy with a victory at the second extra hole.

The battle of two great South Africans was also won on the 20th as Retief Goosen saw off Ernie Els.

England's Ross McGowan, who beat Stricker in the first round, fell victim of young Japanese star Ryo Ishikawa, who won 1-up.

He beat me last year. Funny enough, as players, we don't forget those things.
--Camilo Villegas

But his compatriot Ian Poulter continued his fine form with a 2&1 win over Adam Scott of Australia, while fellow Ryder Cup star Spain's Sergio Garcia beat Swede Peter Hanson by the same score.

Tiger Woods, who is making his first public appearance at PGA Tour headquarters in Florida on Friday since going into self-imposed exile, chose not to make his return at the tournament, while world number three Phil Mickelson is also sitting it out.