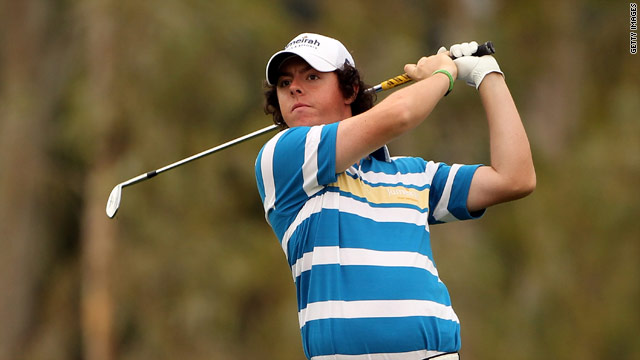 Rory McIlroy is expected to be fit for the World Match Play despite some recent discomfort with a back complaint.
STORY HIGHLIGHTS

(CNN) -- Rory McIlroy has been handed a fitness boost ahead of the prestigious WGC-Accenture World Match Play Championship in Arizona next week.

The Northern Irishman was forced to see a back specialist following last weekend's Dubai Desert Classic, after suffering some discomfort during the tournament -- in which he finished sixth.

However, McIlroy, who is playing on the US PGA Tour this season, has been told his problem is nothing more than a slight nerve impingement -- and some rest should see him fit to play in the Tucson event.

It is a matter of resting and managing my schedule so that I am not playing too many weeks in a row.
--Rory McIlroy

McIlory has been told his problem could be linked to the hip movement in his swing and the 20-year-old added: "The physios go backwards and then forwards and that puts a little strain on the lower back.

"I do all the exercises I can to make everything stronger around the joints and it is a matter of resting and managing my schedule so that I am not playing too many weeks in a row."