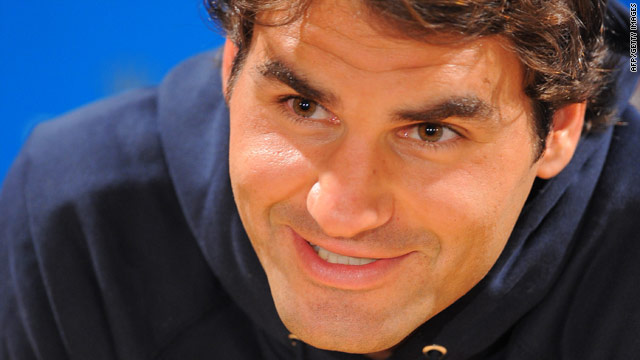 (CNN) -- Sports superstar Roger Federer has organized a charity event to raise funds for the victims of the Haiti earthquake, as the tennis world rallies to contribute to the cause.

Federer, the world's top-ranked player, will take part in an exhibition event in Australia on Sunday along with other top names such as Rafael Nadal, Andy Roddick, Kim Clijsters, Serena Williams and Samantha Stosur.

They will play in doubles matches at Melbourne Park in the state of Victoria's capital city, giving up their last day of preparation ahead of this year's opening Grand Slam tournament, the Australian Open.

"The entry fee is a minimum donation of $10. This should be fun and it's for a great cause," the Swiss said on his official Web site.

"I think it's something as a tennis family we're very happy to do. I know it's on the eve of the first Grand Slam of the season, so for some it's not so easy maybe mentally to separate a few things -- but I think it's a great initiative.

"The devastating earthquake which hit Haiti on Tuesday measured 7.0 on the Richter Scale and has left tens of thousands of people dead. The United Nations has launched an appeal for hundreds of millions of dollars to try to help around three million people in need."

Federer supports several charities, having launched his own foundation in 2003 to help disadvantaged children.

The 28-year-old, who has won more Grand Slam titles than any other male tennis player, also visited tsunami victims as part of his role as a UNICEF Goodwill Ambassador.

Meanwhile, Marcos Baghdatis, who lost to Federer in the final of the 2006 Australian Open, has donated $5,000 of his prize money for winning the Sydney International tournament on Saturday to the World Vision Australia Haiti Earthquake Appeal.

"I have seen the pictures on the news and it is just horrific. I want to send my condolences to everyone affected by the earthquake."

Gasquet, who has dropped to 53rd in the rankings after serving a ban for testing positive for cocaine last year which was later reduced due to mitigating circumstances, was seeking his first title since September 2007.

Sydney doubles champions Daniel Nestor and Nenad Zimonjic both donated five percent of their prize money to the appeal.

"I don't think we can fully comprehend the devastation of the earthquake over in Haiti, and we just want to do our part in helping everyone who is suffering during this difficult time," Nestor told www.atpworldtour.com.

American John Isner also contributed to the relief fund, donating $5,000 to the Red Cross from his first prize for winning the men's tournament in Auckland, New Zealand.

"It's a small contribution to help the victims in Haiti. What happened there makes us realize how lucky we are," said Isner, who defeated France's Arnaud Clement 6-3 5-7 7-6 (7-2) in the final of the Heineken Open on Saturday to claim his first ATP Tour title.