Lindsay Lohan will start new year out of rehab 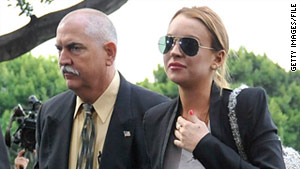 (CNN) -- Lindsay Lohan checks out of the Betty Ford clinic Tuesday after three months of court-ordered substance abuse rehab, according to her father.

The actress voluntarily entered rehab on September 27, three days after a judge overturned another judge's decision to send her to jail for violating her probation with a failed drug test.

Los Angeles Superior Court Judge Elden Fox later allowed her to stay in rehab instead of going to jail for the probation violation, but he set her earliest release date for January 3 to prevent her from partying on New Years Eve.

"You have to change your lifestyle," Judge Fox told the 24-year-old actress during her last court appearance in October. Otherwise, Lohan will destroy her reputation and be "unemployable and uninsurable," he warned.

Michael Lohan was busy Thursday preparing for his daughter to move into a new Los Angeles home on Tuesday. He said he was buying new closets to hold her large wardrobe.

If Lohan violates the rules of her rehab program or fails a drug test before her next court date on February 25, she will be sent to jail for 180 days, Judge Fox told her.

Staying clean and sober until then would end Lohan's supervised probation, and she can "put this long episode behind you," Fox said.

Lohan's well publicized clash with a clinic worker earlier this month has not been counted against her.

"She has learned her lesson," defense lawyer Shawn Chapman Holley told Fox as he agreed to let her out of rehab early on August 25.

"She's very serious about her sobriety," Holley said then. "She looks forward to proving to the court that she is taking this seriously."

But she failed a drug test less than a month later, triggering the probation violation hearing.