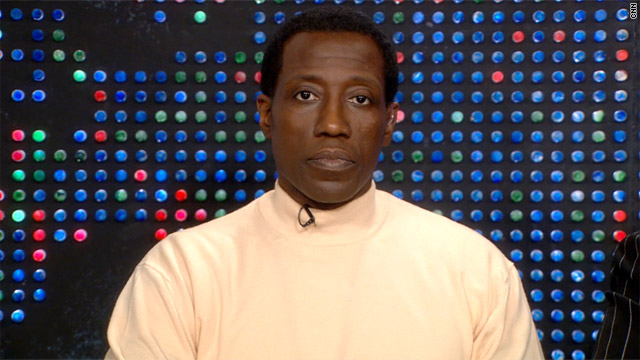 Los Angeles (CNN) -- Actor Wesley Snipes said he was nervous about going to jail on Thursday, but was hopeful that his prayers would be answered.

Snipes' attorney said he is appealing Snipes' misdemeanor convictions for not filing tax returns in 1999, 2000 and 2001. Snipes was acquitted of felony charges.

"This is another thing that has been misreported: It has been framed that I was a conspirator and that I was an architect in a scheme by an organization that has been characterized as tax protesters," Snipes said. "The press hasn't reported that I was a client of people who I trusted [who] had knowledge and expertise in the areas of tax law that would protect my interests."

Last February, a jury convicted Snipes on the misdemeanor charges, but he was acquitted of more serious felony charges of tax fraud and conspiracy. Jurors accepted his argument that he was innocently duped by errant tax advisers.

One juror, Frank Tuttle, gave Larry King Live a written statement that three other jurors had made up their mind that Snipes was guilty before the trial began. The jury's verdict was a compromise between those jurors who thought Snipes was guilty and those who didn't, Tuttle said in the statement.

"They claimed that there was a certain number that was owed and that number has been all over that place. The press has escalated it and changed it a number of times. But we think we are fully complaint with what was owed," Snipes said. "Not did I pay but my position is that I always paid."