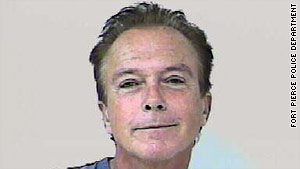 Cassidy, 60, failed roadside sobriety tests and registered at .14 on an alcohol breath test, according to the arrest report. A reading of .08 or higher is illegal for drivers in Florida.

The singer-actor "appeared to be somewhat confused" and was "very apologetic for having to be stopped," the arresting officer said.

Police found a half-empty bottle of bourbon under the seat of Cassidy's Mercedes, although he told the officer he had only consumed a glass of wine with lunch several hours earlier, the report said.

He told the officer he took a hydrocodone pill -- a pain medication also known as Vicodin -- about three hours earlier.

The trooper pulled Cassidy over after his car left the roadway and went onto the shoulder rumble strip two times before cutting off another car at an exit ramp, the police report said.

Cassidy posted bail early Thursday and was released from the St. Lucie County Jail, according a jail spokeswoman.

Cassidy's publicist said his lawyer advised her not to comment yet on the incident.

"David would, however, like to assure everyone that he is all right and thank his family, friends and fans for their love and support," publicist Jo-Ann Geffen said.

Cassidy starred on "The Partridge Family" in the 1970s, launching his pop music career. He would fill concert venues with screaming teen-aged girls with such hits as "I Think I Love You."

His most recent acting job was on the ABC Family sitcom "Ruby & the Rockits," in which Cassidy played an aging former teen heartthrob. The show was canceled this year after its first season.