13 celebs who said 'no way' to Playboy 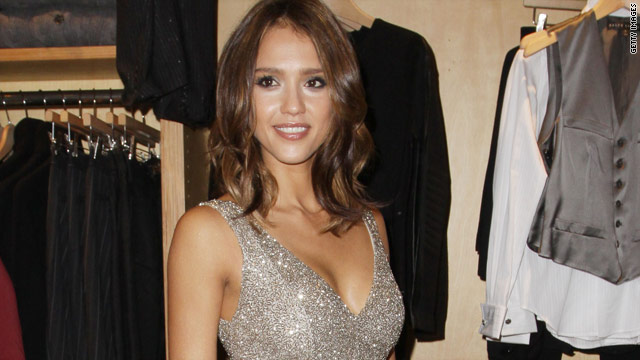 You may have seen the Jessica Alba "Playboy" cover, but the actress actually refused to pose for the magazine.
STORY HIGHLIGHTS

(The Frisky) -- Jenni "J-Woww" Farley of MTV "Jersey Shore" fame might wear bedazzled boy-shorts as if they were long pants, but she isn't going to take them off for "Playboy." She has turned down a request to pose for the mag, even though the offer was reportedly for $400,000. "I am not going to do Playboy in the near future," she told Ryan Seacrest on his KIIS-FM radio show recently. "There is a better opportunity out there, which everybody will probably see soon." Most think this "better opportunity" is a possible "Jersey Shore" spin-off show with her bestie, Snooki. Which has us craving pickles now.

I guess we will just have to rely on our imaginations if we want to see J-Woww sans clothes. In her honor, here are 12 other ladies who turned down Playboy.

The Frisky: 8 celeb who were former Hooters girls

1. Mel Gibson's ex-girlfriend and baby mama said "never"
Oksana Grigorieva also recently turned down Hugh and crew. She supposedly had an offer on the table for $75,000 offer to pose for "full nude" shots and a cover. But Oksana's rep Steve Jaffe stated, "Not now, not ever, nor for any amount of money, would our client, Oksana Grigorieva, even consider any offer to pose for 'Playboy.'" It doesn't get much clearer than that, but maybe her reaction was due to the fact that J-Woww's offer was allegedly much higher?

2. "Maneater" singer won't do it even with clothes on
Canadian songstress Nelly Furtado once turned down a reported $500,000 to pose fully clothed in "Playboy." Repeat: with her clothes on. Nelly denied the publisher, saying, "To do it would be a vanity thing, an egotistical thing. It's not to say I would never do it. It's very tempting." Half a million for fully clothed shots? That's a pretty decent ego boost.

The Frisky: 12 stars posing using their hands as bras

3. Lady Gaga won't take her pants off for money (just for free)
Even though Lady Gaga spends a good amount of time not wearing pants, she turned down an offer to pose in the lad mag, even after Hugh himself Twittered his excitement about a potential shoot. "I mean, if I was a glamour model, I would be delighted [with Playboy's offer], but for me it's all about the music... Ask me again, though, when I have a new album to plug." Guess it is important to keep your options open.

4. Born-again Bieber mama won't go there
It's kind of messed up that people like Justin Bieber so much that they want to see his mom naked. Patricia Bieber turned down a reported $50,000 offer to pose topless in "Playboy." Bieber's rep said, "While nature's beauty in any form is worthy of appreciation, Justin's mom Patricia is a born-again Christian. There is no truth that she would ever pose in "Playboy," as it goes against her religion." Did you hear that, Carrie Prejean?

The Frisky: 8 celebs who were declared "un-Christian"

5. Maybe six is the magic number for this Spice Girl
Former Spice Girl Melanie Brown has turned down "Playboy" five times. She said, "They're offering me a ridiculous amount of money but I'm just not ready to do it ... I'll consider it in the future when I feel the time's right." Maybe there could be a Spice Girl reunion spread?

6. Lohan's been there, done that
"Playboy" has been trying to get Lindsay Lohan naked for ages, most recently increasing her offer from a rumored $700,000 to $900,000 last year. One of Lindsay's representatives said that Lindsay would "be happy to do the cover, but no nudity... If there's nudity, then the answer's no ... She's not going down the 'New York Magazine' road again." I suppose the naked Marilyn Monroe-inspired shoot did cause a bit of a kerfuffle for Li-Lo

7. Citigroup banker eats her sexy words
"Too sexy" Citigroup banker Debrahlee Lorenzana was offered a reality show and a "Playboy" spread. But Lorenzana said, "I don't want to be famous, I try to stay away from that. I just want to be an example, that's all. If people in the future still remember my name, I want to be remembered as a woman who stood up for her rights." Apparently, Lorenzana also appeared in a 2003 plastic surgery documentary saying she'd like to be stacked like "a little Playboy Playmate." But that's neither here nor there ...

8. Jennifer Love Hewitt is not in love with the idea
Jennifer Love Hewitt has dealt with plenty of needless controversy over her body, but had no desire to prove her critics wrong by taking it all off. Her rep confirmed that "Playboy" had asked the actress to pose, saying, "There was an offer, but she declined." So much for seeing Jennifer's body in the pages of "Playboy."

The Frisky: 9 celebrities explain why they cheated

9. Bad timing for the Hulk's daughter
"Brooke Knows Best" star Brooke Hogan turned down the magazine in 2008. Her representative said, "Brooke just didn't feel that it was the right time... It's not out of the question for the future, but we'll have to see." I hope she waits until Hulk Hogan isn't around to see that because it's confusing enough with his doppelganger girlfriend.

10. Melissa Joan Hart learned her "Maxim" lesson
Melissa Joan Hart drew some controversy after posing in her skivvies for Maxim but said that it helped her turn down "Playboy." "I learned that I didn't want to do "Playboy." They came around and offered me a million dollars, which I had to seriously consider," she said. "Initially it's like, 'Yeah, I'll take my clothes off for a million bucks, are you kidding?'... But I decided that because of the reaction I got from "Maxim" I wasn't comfortable -- and my brother had that cover shoved in his face for months. That made me say no." And that's how Clarissa explained it all.

The Frisky: I Googled my date and found out he was a rapist

11. "Playboy" played Jessica Alba
You may have seen the Jessica Alba "Playboy" cover, but the actress actually refused to pose for the magazine. After she was voted one of the "25 Sexiest Celebrities" in 2006, "Playboy" asked and she turned them down, but they obtained a photo of a bikini-clad Alba from Columbia Pictures and ran it on their cover only. Alba said, "Playboy" has violated my personal rights and blatantly misled the public who might think I had given them permission to put me on their cover when I didn't." Teenage boys around the country were equally upset, we're sure.

12. Daughter of Darkness respectfully declined
Last year, Kelly Osbourne received an offer from "Playboy," but turned them down, saying, "It was the second time they have asked and respectfully I declined, as I don't feel it's the right thing for me. I know if I ever decided to do something like that I'd want it to be tasteful and done very beautifully. But still I turned it down -- I wouldn't want my father or brother Jack to open up a magazine and see me naked!" I'm sure Ozzy and her bro are both grateful for such restraint.