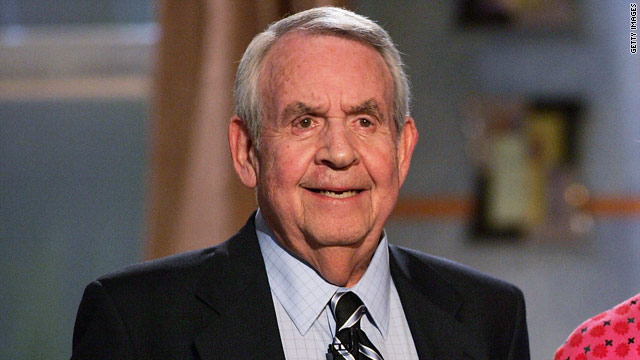 Bosley's 50 years as a television actor included roles on dozens of shows, but he was best known as Howard Cunningham, the patriarch of a 1950s "Happy Days" family, a show that aired for 11 seasons starting in 1974.

"Remarkable on so many levels, Tom's insight, talent, strength of character and comic timing made him a vital central figure in the 'Happy Days' experience," said Ron Howard, who played his son, Richie. "A great father and husband, and a wonderful artist, Tom led by example, and made us all laugh while he was doing it."

Henry Winkler, who was "The Fonz" on "Happy Days," said Bosley "was a family member, both on and off the sound stage."

"We acted together, traveled together and played charades together," Winkler said. "He was a loving husband, a doting father and a fantastic grandfather. He will be so missed but never forgotten by the Winkler family or the world."

Bosley's professional acting career began on stage in the 1950s, including a Tony for his role as New York City Mayor LaGuardia in the 1959 musical "Fiorello!"

He had just completed chemotherapy treatment for lung cancer, which was diagnosed five months ago, when he suffered heart failure, his wife, Patricia Carr, said.

Funeral arrangements have not been announced, but the family is asking people to make donations to their favorite cancer charity.

Bosley played the title role in "Father Dowling Mysteries," a series that ran on television for four years, beginning in 1987 and his distinctive voice was heard in numerous broadcast commercials and animation productions.