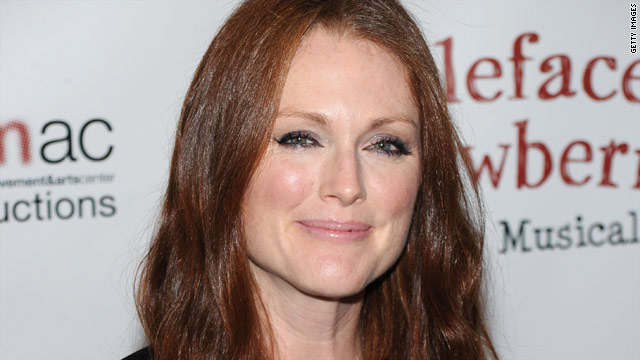 (CNN) -- Julianne Moore's children aren't allowed to see her movies -- and they probably wouldn't want to, anyway. The 49-year-old actress told CNN that her movies are too grown-up for her 8- and 12-year-old children. Plus, Moore said it's not really interesting to see your mother do anything.

"I think most of us have a very strong interest in our parents being our parents," Moore said. "If my kids had an interest in my job, I would be worried."

With a flourishing acting career, two successful children's books and a rewarding family life, Moore still finds energy for the things that are important to her. Most recently, she donated her time and a recipe to Barilla's Share the Table program, which appears in "The Celebrity Pasta Lovers' Cookbook." The online-only recipes can be downloaded for free through Friday. Barilla hopes to encourage families to eat together and will donate $1 to Meals on Wheels each time the book is downloaded.

The actress spoke with CNN about life as a working mother, the Oscar buzz surrounding "The Kids Are All Right" and the honor of receiving a lifetime achievement award at the upcoming Rome Film Festival.

CNN: Why did you decide to get involved with "The Celebrity Pasta Lovers' Cookbook"?

Moore: It's a pretty great program. The cookbook is encouraging families to cook at home and use that time to connect with your family. Every time somebody downloads it for free, they donate a dollar to Meals on Wheels, so it's a pretty generous and lovely program.

CNN: How did you come up with your recipe for the book -- vegetarian lasagna?

Moore: I like to make anything that comes in one pot -- it's really useful to me, because that's what I find most challenging about cooking. ... Mario (Batali, a chef, restaurateur, and the book's guest editor,) tweaked it. He's basically taken everybody's recipes and made them wonderful and glamorous. People submitted things that they make for their families and that they like, and Mario really finessed them all.

CNN: How do you find time to cook for your family?

Moore: You have to have a little bit of planning. With cooking, it's one of those things you literally have to decide and know what you're going to do. We'll be saying, "What are we going to be having for dinner?" at like 8 in the morning. ... When I'm not working, I'm lucky, because I'm home, I pick up my kids from school, they start their homework and we'll start to get dinner ready.

CNN: You're known for doing a mix of Hollywood hits and indie films. How do you decide which projects to pursue?

Moore: It's pretty easy -- they sort of present themselves to me when I read the script. If I read something and I'm attracted to the story and the language, that's how I make my decision. There are times when it seems pretty bleak, and I'm reading a lot of stuff and I'm like, "Wow, I don't like any of this." And then suddenly I'll read something and be like, "Wow, this I like. This is fantastic." The movie I have coming out next is called "Crazy, Stupid, Love" and it was one of those things where they send you the script and you read it and it's like, "This is delightful, it's absolutely charming."

CNN: What drew you to the "Kids Are All Right" script?

Moore: Well it was Lisa (Cholodenko, the film's director and co-writer), first and foremost. She's somebody whose beliefs I had really admired. ... I approached her and told her how much I liked her work, and how much I wanted to work with her. She said, "I want to write something for you," then she sent me "The Kids are All Right." And I loved it and thought it was very funny and real and warm and very much a portrait of family and of a relationship -- a middle-aged relationship. And I thought it was incredibly relatable on so many levels. It's not something that's easy to find, something that represents family in that kind of wonderful, modern but really universal way.

CNN: Did it change your views about gay marriage?

Moore: It's something I've believed in for a long time. People ask if I think that movies influence popular culture, and yes, in a way, but I always say that movies more often reflect popular culture. A movie like this can't exist if it's not something that's already happening all across the United States. There are so many gay families -- so many two moms and two dads -- and very normal, very idiosyncratic, really regular American families happening all over the place. The fact that this movie exists is really a way to recognize that. In my life and in my children's lives, gay families are just part of the fabric of their world. We know plenty of families with two moms and two dads, and you know, they're just the same as we are.

CNN: You're receiving a lot of Oscar buzz for your work in "The Kids Are All Right." How does that make you feel?

Moore: Great. We're so absolutely delighted that people have responded to this movie. It was a movie that was really, really important to me. It was five years in the making. My relationship with Lisa is incredibly important, so the fact that we were able to do something that people are talking about and people are moved by and they're relating to, and with any luck, receive some recognition this way, it's just great. It's great for the film, I think it's great for gay families, it's lovely for us. So it's always so nice and flattering to be mentioned in those terms.

CNN: Did being a mother yourself make it easier to portray one in "The Kids Are All Right"?

Moore: I think that everything you have as a human being -- everything you do and everything you experience -- just adds to your experience level as an actor. So, yeah, that was something that I was very familiar with -- that family paradigm. I don't have children that are adolescents, but I've been with the same person for 15 years, and we have two kids, and it's a pretty regular life.

CNN: Did you begin imagining what your kids will be like when they're teenagers?

Moore: No. I mean my kids are my kids. Those kids were those kids. So I don't really think about it in those terms. I think every parent, though, deals with the reality and the heartbreak of what it's going to be when your kids grow up and leave home. That's something that's always in the back of your mind.

CNN: From your children's books about Freckleface Strawberry and your movies, are you giving your kids a good lesson in acceptance?

Moore: I don't think that I need to give them a lesson. I think really, what you need to do, is live your life with that kind of reality. I think what everybody always says about raising children is you have to teach by example. They have to see what's going on in the world. You have to work really hard to give a child a prejudice. Children are naturally born without one. So, if the reality of gay families is kind of out there, if they see families living this way, then it's completely natural and normal for them.

For Freckleface Strawberry (now an off-Broadway show), that's a different issue. ... Kids get to be about 7 years old and suddenly, they're like, "Hey, I'm taller than this kid," "My teeth are kind of big" or "I don't like my ears" or this or that or the other thing, and it just breaks your heart. Because you're like "No, oh my gosh, you're perfect, how could you not think that?"... I didn't grow up and lose my red hair and my freckles. I grew up and still don't love my freckles, but can't do a whole lot about it. And I have other things to worry about and other things that are more important, like my family and my work and my friends. The things like, "My ears stick out" ends up being like, "Well, whatever."

CNN: You act, you write, you're a mother ... which role is most difficult?

CNN: It was recently announced that you're going to receive a lifetime achievement award at the Rome Film Festival. What's that been like?

Moore: It's such a lovely honor, and I'm really looking forward to it. I think it will be an awful lot of fun.

CNN: You're almost 50 ... is that too young to receive a lifetime achievement award?

Moore: Who knows how long I'm going to live? I think it's nice whenever anybody wants to honor you for anything. I'm delighted that they're thinking of me in this way. So like I said, too young, too old, who knows? It's always nice to receive an honor, and I think one should receive it graciously.