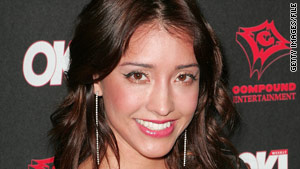 Fernanda Romero could get up to 21 months in prison if she is convicted.
STORY HIGHLIGHTS
RELATED TOPICS

Los Angeles, California (CNN) -- The sham marriage trial of Mexican actress Fernanda Romero, under way in a Los Angeles federal court, offered more drama this week than the soap operas she is famous for.

The courtroom cast included celebrity photographer and reality TV star Markus Klinko, whom defense lawyers tried to paint as a revengeful ex-boyfriend who turned her in to immigrations agents.

Romero sat directly in front of jurors, holding hands with co-defendant Kent Ross, the Los Angeles musician she allegedly paid $5,000 to marry her so she could get a U.S. work visa.

The couple had an "unconventional relationship," but their marriage was real, a defense lawyer said in opening statements.

The 28-year-old actress-model began sobbing as Klinko testified against her Wednesday, outlining his romantic relationship with Romero that he said began after she married Ross.

The judge scowled several times as the lead defense attorney questioned Klinko about areas already ruled irrelevant to the case.

Real's rulings frustrated defense efforts to press Klinko about why he hired the private investigator who dug up the evidence that prompted immigration agents to begin their probe of Romero's marriage.

Klinko testified that it was "completely incorrect" that his motivation was to get his former girlfriend deported.

Klinko said his lawyer turned the evidence over to the government only because he feared Klinko might by extorted by Ball.

The judge also rejected the defense attempt to allege that Klinko, a Swiss native, was himself involved in a sham marriage in 1987 -- a charge he denied outside court.

"The defense attempted over and over again to taint Mr. Klinko with malicious and false smears," said Klinko's lawyer, Lisa Bloom. "The judge repeatedly blocked them from doing so by sustaining multiple objections to their improper questions. We thank the judge."

The prosecutor in the case, Assistant U.S. Attorney Jim Left, said Romero could get between 15 and 21 months in prison if convicted, though such cases usually produce shorter sentences.

The federal complaint accuses Romero of paying Ross, 28, to marry her June 12, 2005, but alleges that they never lived together as a couple.

Romero began dating Klinko a month later, and they lived together for several months, the complaint says. According to a sworn affidavit by Immigration and Customs Enforcement Senior Special Agent Bonita Canterberry filed in the case, Klinko and Romero's relationship ended in 2007, about the same time Klinko filed a lawsuit against Rock & Republic and Ball, alleging breach of contract in relation to a photo shoot. Klinko also accused Ball of extortion.