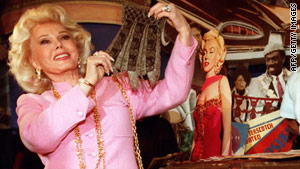 Zsa Zsa Gabor, pictured in 1996, is home in California after an infection delayed her recovery.
STORY HIGHLIGHTS
RELATED TOPICS

Los Angeles, California (CNN) -- Zsa Zsa Gabor is back in her Bel Air, California, mansion three weeks after getting a new hip to replace the one broken in a fall last month.

She was rushed there on July 17 after she fell while reaching for the telephone as she watched TV in her bed, her husband, Prince Frederic Von Anhalt said.

"It's been a long ride and I have cherished the time I have been allowed to spend with my mother, whose strength and will to live has astonished us all," said Francesca Hilton, who spent many hours by her mother's hospital bedside since the accident.

Hilton has not been able to regularly visit her mother's home since a legal dispute with the prince.

The stepfather and stepdaughter have had a cold relationship in recent years that included a legal fight over a mortgage on Gabor's Bel Air mansion.

Gabor has been frail and "pretty much confined to a wheelchair" since a 2002 car accident, Von Anhalt said. The crash occurred when the car in which she was riding with her hairdresser slammed into a light pole on Sunset Boulevard in Los Angeles.