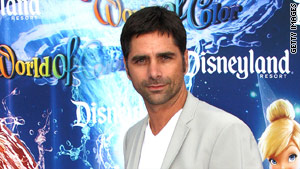 (CNN) -- A Michigan man and woman were convicted Thursday of trying to extort $680,000 from "Full House" actor John Stamos by threatening to sell compromising photos that prosecutors say were never found.

Scott Edward Sippola, 31, and Allison Lenore Coss, 24, could face up to nine years in prison for convictions of conspiracy and interstate communications to extort money, said assistant U.S. Attorney Maarten Vermaat. Sentencing is set for October 8.

"The case was made by the fact that these defendants made threats to damage his [Stamos'] reputation in order to have him pay them," Vermaat said after the verdict in Marquette, Michigan. Jurors deliberated for about five hours Thursday.

According to CNN affiliate WLUC, prosecutors said that Coss and Sippola demanded $680,000 from the television actor or they would sell embarrassing pictures to tabloid publications of Stamos allegedly using drugs.

Vermaat said the defendants sent about 40 e-mails to Stamos threatening to sell the photos. FBI agents got involved and started monitoring Stamos' e-mail account and "eventually communicated by cellular telephone with the defendants pretending to be Mr. Stamos' business manager." Sippola and Coss were arrested in December 2009 at an airport, a pre-arranged drop off spot for the money.

Defense attorney Sarah Henderson alleged at trial that Stamos had a fling with Coss when she was a 17-year-old vacationing on spring break in 2004. Prosecutors said Stamos met Coss during a trip to Disney World in Orlando, Florida. They developed a friendship and the two communicated by e-mail occasionally until November 2009, when the actor turned the photos matter over to the FBI.

According to WLUC, Coss testified there were several photos depicting Stamos using cocaine. She claimed the actor seemed interested in buying the photos.

The actor testified that nothing inappropriate happened at a 2004 spring-break party and, accordingly, he didn't believe compromising photos existed.

Stamos said Thursday he wants to get back to work.

"I would like to thank the court, the FBI and the U.S .Attorney's office for their swift and efficient dealings in connection with this case," Stamos said in a statement Thursday afternoon.

"I am shocked and perplexed how individuals could fabricate so many false stories in an effort to defend a crime. I agreed to be a witness for a federal criminal prosecution and endured countless false accusations about my behavior and appropriateness. The allegations made regarding an inappropriate relationship are completely untrue. These slanderous allegations to smear my reputation were part of their defense to redirect attention away from the federal crime of extortion. There was no hot tub, no drugs, no nudity and nothing sexual in nature involved in my friendship with this woman. They lied about everything from a pregnancy to compromising photos."

A call by CNN to defense attorney Sarah Henderson was not immediately returned.