Weight is a big deal for TV, movie characters 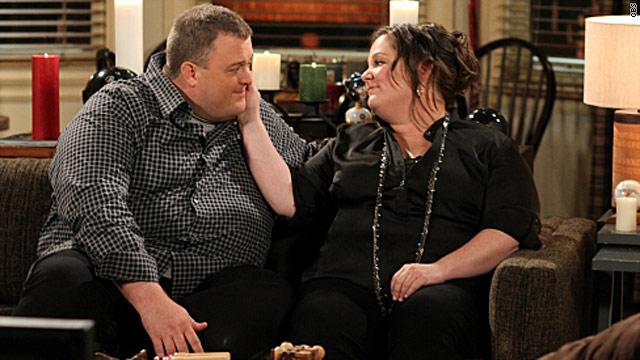 (CNN) -- Can plus-sized actors have starring roles in which their weight isn't a major part of the character or story line?

In an era when plus-sized, Academy Award-nominated actress Gabourey Sidibe stirs negative and positive buzz by appearing in fashion magazines, weight continues to be a major topic in Hollywood and one that often creeps into story lines.

And into the center of controversy. While it's done well so far in the ratings, the CBS sitcom "Mike & Molly," about a couple who meet at an Overeaters Anonymous group, has drawn complaints for its abundance of fat jokes. It's also drawn cries from some viewers who aren't comfortable watching intimacy between two plus-sized actors.

"At this point, if a show is centered around a plus-sized or an obese character, it does seem to be a big plot line," said Lizbeth Scordo, a contributing editor for the Yahoo TV blog. "With 'Huge,' it was about a weight loss camp, and with 'Mike & Molly,' [the show's producers] keep saying it's about two blue-collar people falling in love. And that is part of it, but if you've seen the show, you know there are a lot of weight jokes."

The ABC Family series "Huge" appears to be at the other end of the spectrum. The recent cancellation of the series caused an outcry among fans disappointed that the show would not be returning for a second season.

Jezebel, a celebrity, sex and fashion site for women, started a petition to save the series, and Entertainment Weekly writer Jennifer Armstrong not only signed it, but also offered viewers five reasons to support the campaign.

The series, which starred "Hairspray" actress Nikki Blonsky, had a majority plus-sized cast. Lesley Kinzel, whose blog Fatshionista explores issues of weight and culture, said that's one of the things that made the freshman show so special.

"The fact that everyone on the show, for the most part, tended to be fat, it almost ceased to matter," Kinzel said. "It was important because since it took place at a fat camp, there were a few plot points that had to do with eating and food, but you almost sort of forget. Seeing so many fat characters, it almost removes the weight as a plot point, and you got to focus on the characters as individuals."

In a video on the show's official site, Blonsky explained that she was drawn to the project, in part, because there was nothing like it on television.

"The media has such a portrayal of what you are supposed to look like in this world, and it's not realistic," the actress said. "It's a show that's showing people, 'Hey, you look like us, and it's OK.' "

Sasha Pasulka, who runs celebrity site Evil Beet Gossip, said TV and movies sell the fantasy of attractive people with fabulous lives. For that reason, it's a big deal when the characters vary from that.

"It's not just true of overweight people," she said. "You never see unattractive people on TV or movies without it being an issue. It could be someone with bad skin, or a limp or a burn, anything that's not visually perfect we have to bring up, or it has to be like a third character."

"When we watch TV or movies, we feel like we need an explanation when we are not staring at a beautiful person," Pasulka added. "If there is anything physically imperfect about the person we are staring at on the screen, we don't expect it and we need to know why."

Yahoo TV's Scordo pointed out that there are a few supporting characters who have managed to exist apart from their weight. For instance, she said, Melissa McCarthy, who plays Molly on "Mike & Molly," has appeared in secondary roles that have not focused on her physique.

Kinzel, who in addition to being a blogger is an activist, said she often heard fans of "Gilmore Girls" remark as to how refreshing it was that McCarthy's character on that show was not defined by her weight. It's her hope that all plus-sized characters are treated that way someday, Kinzel said.