In defense of reality TV 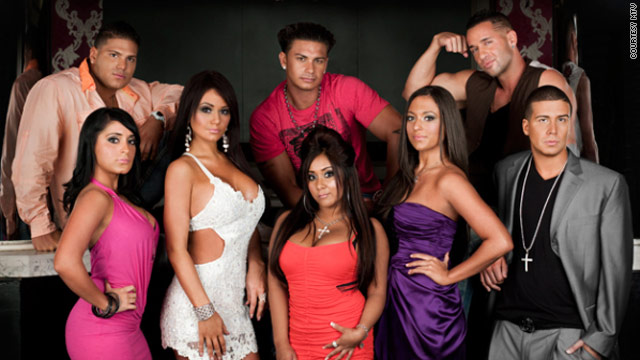 MTV's "Jersey Shore," which begins its second season Thursday, has been praised as great entertainment and vilified as trash.
STORY HIGHLIGHTS

(CNN) -- You've heard all the criticisms.

Indeed, "reality TV" has become a shorthand for everything wrong with America: shallow, artificial, attention-craving phonies looking for their Warholian 15 minutes of fame. To the naysayers, MTV's "Jersey Shore" -- which returns Thursday for its second season -- is Exhibit A, from its spray-tanned stars to its overly dramatic situations.

But that's not the whole picture -- or even the half of it, says Andy Dehnart, who writes about reality TV on the site realityblurred.com.

Indeed, he says, there are some current reality shows that are up there with the best of TV, period. He singles out Discovery Channel's "Deadliest Catch" and Animal Planet's "Whale Wars" as two standouts, observing that "Catch's" handling of cast member Phil Harris' death was "more raw and intense than anything we've seen on TV this year."

Reality TV has "absolutely evolved as it's gotten older," he says. "Today I think we have some of the absolute best unscripted TV we've ever seen, television that consistently outperforms and is more interesting and more entertaining and better quality than scripted TV."

Praise and criticism of reality TV go back to the genre's earliest days. "An American Family," the 1973 PBS documentary sometimes considered the precursor to modern reality TV, was lauded by no less an eminence than anthropologist Margaret Mead. She believed the show was "as new and as significant as the invention of the drama or the novel -- a new way in which people can learn to look at life."

Just six years later, the Albert Brooks film "Real Life" was taking potshots at the genre, noting how much of "reality" could be manipulated in the name of entertainment. At one point Brooks, as the film's neurotic director, laments, "The studio is right. The audience loves fake. They crave fake. Reality sucks."

The contradictions have become plainer since the birth of the modern reality show, MTV's "The Real World," in 1992. That show, which took several strangers, molded them into an artificial "family," placed them in an artificial environment and let their drama play out in front of the cameras, created the reality TV template.

The form has been tweaked by "Survivor" and "Big Brother" (which added a competitive aspect), "Jersey Shore" and the "Real Housewives" series (which cater to over-the-top personalities) and "The Hills" (which apparently blended the "real" with the scripted, right down to its clever finale).

By now, the term "reality" has become such a selling point that many shows lumped under the reality umbrella, such as "Cops," "American Idol" or "Minute to Win It," are actually examples of old genres, Syracuse University professor and pop culture expert Robert Thompson points out -- straight documentary, talent show and quiz show.

With so many versions of reality being offered, executives say it's a challenge to create compelling TV. Tony DiSanto, MTV's president of programming and development, says his network produces upward of 60 pilots and 60 to 70 series a year -- and that's not even including all the outside pitches the network sees.

"I think that's the key for reality television, finding these amazing people who will engage and draw you in," he says.

Characters are also top of mind for Nancy Daniels, senior vice president of production and development at TLC. And it helps, she says, if a character's work lends itself to storylines.

For example, Buddy Valastro, the bakery owner in "Cake Boss," spends most episodes creating cakes and pastries for clients, even as he navigates the family dynamics of his Hoboken, New Jersey, shop. The jobs provide an endless source of fodder for the show.

"You can be driving towards an individual [design] masterpiece at the end of each episode," Daniels says.

Of course, sometimes the storylines can get out of hand, even as the network reaps the ratings bounty. "Jon and Kate Plus 8" began as a pair of documentaries on TLC's sister network, Discovery Health, then turned into a series. As the ratings climbed, the story of a striving married couple, Jon and Kate Gosselin, and their eight children became grist for supermarket tabloids, which played up the couple's romantic lives, family squabbles and sudden financial success until the show had become a minor part of the Jon-and-Kate soap opera. The title of the show is now "Kate Plus 8," reflecting the couple's divorce.

DiSanto says he is wary of the same thing happening to "Jersey Shore," which became a breakout hit last winter.

"It's dangerous. If a show is built on authenticity, and people who are not self-aware of the cameras suddenly get propelled to a certain level of fame ... that can start coming through on screen," he says. "We made a decision to quickly ramp back up in production [for season two] and not go back to Jersey -- go to Miami, somewhere warm. And as soon as we pulled them away from the real world, and they all got back together, they got back right to where they were in season one."

He's aware of the skepticism that greets the word "authenticity," but stands firm: "They're 100 percent not actors. As a writer you probably couldn't even conceive of the stuff that happens in the show."

Sure, says Thompson, not every reality show is top-drawer TV, on the level of "Survivor's" first season -- but the same can be said of scripted television. Besides, he adds, there's something to be said for solid entertainment.

"These programs can be really, really compelling," Thompson says. "[Even] trash can be really good at what it does. Let's face it: Not everything is a Henry James novel."