A four-hour trip through 'Riverworld' 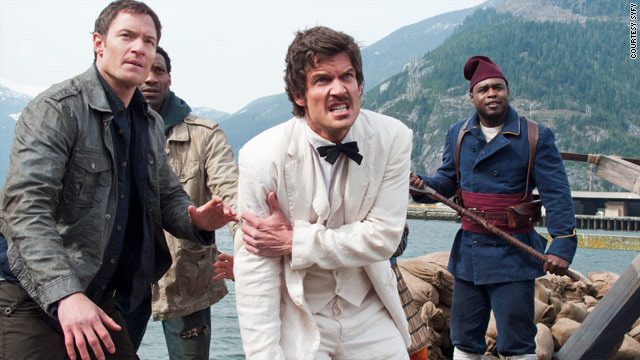 Atlanta, Georgia (CNN) -- If life were filled with historical figures facing perilous situations along an endless, winding river, then Syfy's "Riverworld," premiering this Sunday, would certainly promise an action-packed trip.

Here's the nutshell version: Penikett plays a war reporter named Matt who falls in love with a tour guide named Jessie, played by Vandervoort. We meet them only briefly before they are killed by a suicide bomber. Penikett's character awakens on the banks of a river, not really knowing what has happened to him, and finds countless others in the same situation. But Jessie is not among the people who awaken in this new world, and Matt sets out in earnest to find her.

His journey leads him into dangerous encounters with historical figures who have clearly been in this mysterious world far longer than he has. (It seems that people who were evil in their first life are just as evil in their second.) So Matt teams up with unlikely friends in his search, among them Mark Twain (played by Mark Deklin) and a 13th century samurai warrior (played by Jeananne Goossen). But there's a twist. Matt's character soon discovers that death is relative. When people die in "Riverworld," they are reincarnated, apparently by blue aliens with their own political agenda, which the show never really reveals.

"Riverworld" addresses the thornier side of many of the issues that Farmer, who died just last year at the age of 91, famously addressed in 75-plus works over his lifetime: love, hope, betrayal, aliens and a most frustrating search for purpose. Whether it's 1950 or 2010, the search for the meaning of life is a fascinating subject to explore. Religion does it, philosophy does it, and perhaps in a far more entertaining way, science fiction does it.

Penikett spent several weeks in Vancouver, filming the series last year. A couple of weeks ago, he tried to convince me that the love story was key, and at first, I thought maybe Penikett was just far more romantic than I am. It wasn't love that came to mind as I watched his character's encounters with forces of historic evil. (Nor did I think it was love to see what he discovers when he finally finds her.)

To me, the message was about the endless search for meaning in a world where people are perpetually reincarnated and plopped right back along the riverbank without really knowing how or even why. For me, it was the question of purpose that lingered. But just like in "Riverworld," once you see things from a different perspective, your views on a lot of things can change.

"I think the point you make is probably the most important in the miniseries or at least the one thing that anyone who's arrived on Riverworld is trying to figure out," Penikett said. "Why are they there? Have they been chosen to make amends for past mistakes? Does everyone on the planet share similar mistakes, and by whose standards, laws or religions are they judged by?"

As the characters chase the river upstream for a source of enlightenment, you can't help but wonder: Are there lessons here about life and our own world and purpose? Maybe not lessons, so much as nuggets to chew on. Award-winning executive producer Robert Halmi Sr., who spent most of his eight decades drawn to the science fiction genre, found a simple reason to invest his talents in "Riverworld."

"Sci-fi is a form of escape," he said. "It started 120 years ago when the fantasy writers became strong, and it always was an escape from reality, and today of course, reality is horrible."

An escape to a world with just as many problems, but different ones. That's what science fiction is all about, right? Epic battles with the unknown world? Good defeating evil? This particular science fiction endeavor hits closer to home with the thought-provoking questions of life and redemption. Penikett nailed it when he asked: Why are we here? What is the purpose of our lives?

"I think many of these questions plague humans in everyday life," he said. "I can only imagine how confusing and nightmarish it might be if you were getting no true answers."

Don't look for any true answers during the four-hour series. While the entertainment and action will keep you watching, there are few answers to satisfy, which leaves me with one question: Will there be reincarnation for "Riverworld" on Syfy? Halmi hopes so.

"All I know is that Syfy once considered doing a series on it. It would be lovely to keep exploring the alternate options for humanity."

Even without answers, exploring can be fun. After all, isn't life really about the journey?