Why so much Kate-hate for Gosselin? 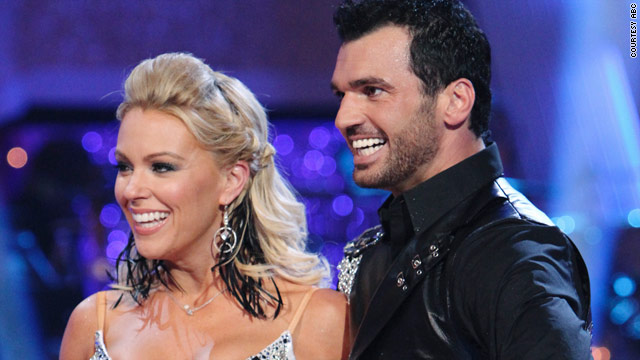 Kate Gosselin, shown here with partner Tony Dovolani on "Dancing with the Stars," has been taking heat from fans.
STORY HIGHLIGHTS

(CNN) -- It seems that all the good will that reality-TV star Kate Gosselin built during her divorce from Jon Gosselin has sunk lower than her scores on "Dancing with the Stars."

Kate Gosselin has always been a lightning rod for criticism, but these days she's getting slammed for everything from her look to her mothering skills.

Message boards have lit up with vitriol for Kate Gosselin's hair extensions, her seemingly rocky relationship with her partner on "Dancing with the Stars" and the time she spends away from her children in order to compete on the ABC reality show.

"Kate needs to go home and try to improve her mothering skills because her dancing skills are nonexistent," wrote commenter M. Moore in response to a CNN blog item about Gosselin's performance on the show.

"I think we are beginning to understand why Jon left to play elsewhere and not have to put up with this person," wrote another who identified himself as Danny.

Video: Kate: My brother made money off lies
RELATED TOPICS

The woman who once received kudos for taking the high road when now-former husband Jon Gosselin was being accused of infidelity, has been characterized online by some as a fame-seeking, money-hungry word-that-rhymes-with-witch.

"I wonder if the Kate we don't see, actually tosses and turns in the wee hours, knowing she's attained her notorious fame and substantial wealth on the backs of her eight children...admitting to herself in the quiet of night that she is truly Kate The Fake," reads a posting on the blog Gosselins Without Pity.

So why all the venom towards Gosselin who in recent interviews insists that she has no choice but to stay in the public eye if she is to support her children?

"I think there has been a new hate towards Kate now with 'Dancing with the Stars' because she plays this role of the victim," said Michael K. creator of the celebrity gossip site D-Listed where he said he receives hundreds of comments regarding his postings on Gosselin. "It's all 'Why are people so mean to me, why are the tabloids saying this about me' and yet she invites that into her home. True she needs to support her kids, but she doesn't necessarily have to be on TV to do that."

"People see her out and about playing the celebrity role and yet she constantly complains about having to be a celebrity," he said. "I think that really rubs people the wrong way."

Gone is the former nurse and mother of twins who spent days on bed rest to give birth to her sextuplets. Kate Gosselin now divides her time between being home with her kids and being at a rehearsal studio for "Dancing."

"I think the reason that she is so polarizing is mostly because she did not start out as a celebrity," said Toni Fitzgerald, who blogs about motherhood for The Sentinel newspaper in Pennsylvania, the home state of the Gosselin family.

"She was a regular mother like so many of us dealing with the things that we deal with," Fitzgerald said. "Now she has these special privileges that the rest of us don't. When you see someone who used to be somewhat normal going and getting these perks, it can be illuminating and troubling to see how they deal with it. "

Since bursting into the spotlight courtesy of the hit TLC-show "Jon and Kate Plus 8," Kate Gosselin has enjoyed such little extras as plastic surgery to help her body bounce back into shape following the birth of twins and sextuplets, and millions of dollars in revenue from the series, merchandise and books she has written.

Fans of the show often commented on Gosselin's treatment of husband Jon for what they viewed as her overly critical remarks about and chastisement of her spouse as the couple struggled to cope with raising their large brood.

But all that changed during the summer of 2009 when the pair endured a very public marital split with Jon Gosselin moving into an apartment in New York City which he shared with his new, and younger, girlfriend.

Fitzgerald said fans immediately felt sorry for Kate Gosselin who paparazzi frequently documented on outings with her children while her estranged husband was spotted out in bars and nightclubs.

"There were allegations that he had cheated on her and while a lot of people thought Kate was too hard on him during the marriage, you can't condone cheating," Fitzgerald said. "People did have some sympathy for her."

Jennifer L. Pozner, executive director of the advocacy group Women in Media & News and author of a forthcoming book about reality television, said the Kate-bashing is indicative of an age old struggle.

Pozner said she believes the media loves to pit women against women and judge them on their parenting. That is not to say that some of the criticism is not warranted, she said.

"There is a bit of valid judgment of parents, of which she is one of two in this situation, who would subject their children to 24-7 surveillance for a reality show and call that in some way a positive thing to do for the kids," Pozner said. "There's no way those kids could possibly understand, evaluate or consent to the implications of living their childhoods on camera and I think that's one of the reasons people are quick to judge Kate."

That being said, writer Toni Fitzgerald doesn't believe people should dismiss the possibility of Gosselin finding ratings success again with her planned new reality show "Twist of Kate." The series will follow the single mother as she travels around the country visiting with people and families facing challenges.

"It's important to note that while there are a lot of people who dislike her, there are probably just as many who support her and feel a real connection with her," Fitzgerald said.

Michael K. said he believes those supporters are keeping the reality star in the limelight.

"She probably has even more fans than she does detractors," he said. "If you have seen her on 'Dancing with the Stars' you know that she is horrible and yet she is back week after week."