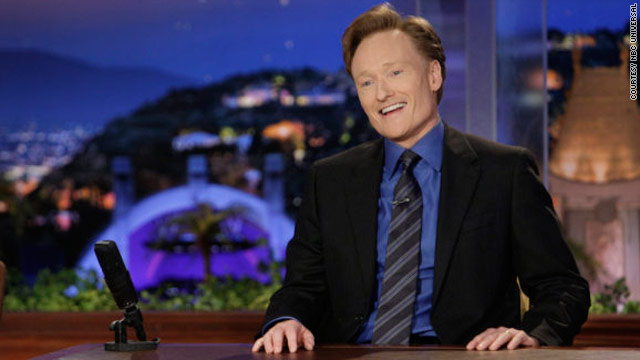 (CNN) -- NBC has been the butt of nearly every joke in late night this week, and many of them were aired on NBC itself.

The jokes, about the late-night positioning involving Jay Leno and Conan O'Brien following the announced cancellation of "The Jay Leno Show," have been a mixed blessing. Ratings, at least in the last few nights, have been up. But will the jokes hurt the brand?

Kicking the network while it's down appears to be working especially well for O'Brien and his "Tonight Show," which, after having lackluster ratings for months, has seen a serious uptick.

"Conan's ratings were way up Tuesday," said Bill Gorman of TV by the Numbers. Those ratings came in the same day he released a statement to the "people of Earth" vehemently disagreeing with NBC's decision to move his show back half an hour to accommodate a slice of late night for Leno.

"The Tonight Show" had a 1.7 rating among adults 18-49 Tuesday, pulling in a slightly higher rating of 1.8 with Wednesday night's show. It increased again Thursday night with a rating of 1.9.

"The Tonight Show" averaged a 1.0 rating the week prior to the late night debacle, according to an NBC Universal press release, which also said O'Brien was on top of all broadcast and cable competition that week. Leno's ratings for the primetime "Jay Leno Show," by contrast, have been doing well, but not as well as O'Brien's, Gorman said.

So yes, he added, O'Brien definitely has gotten a boost, but how much longer can this realistically last? The rest of the week, maybe, but not for much longer than that.

"The reality is that there's no new news; there's only going to be the jokes," Gorman said. "There's the whole 'Team Conan' thing, with people riled up about Conan getting the bad end of the deal, but it's a small number of people."

Both comedians have been taking repeated swipes at the network that feeds them.

Leno opened his monologue Wednesday night with another knock at the Peacock Network.

"Good news from Afghanistan," he began. "Critics of the war have stopped referring to it as 'another Vietnam.' They are not calling it that anymore. The bad news: They're now calling it 'another NBC.'"

O'Brien responded with his own bit of NBC snark during Wednesday night's "Tonight Show," getting in a dig at Leno, as well.

"I just want to say to the kids out there watching: You can do anything you want in life," the comedian said in his opening monologue. "Unless Jay Leno wants to do it, too."

Leno and O'Brien both kept at it again on Thursday night, each taking a dig at the other, as well as their network.

NBC has been mum during its battering; the network hasn't even stopped the monologues from their regular appearances on the Web site Hulu.com, which has boosted the shows' profiles.

"The genie is out of the bottle, and if they decided to take that down, it would be incomparably worse than leaving it up there," said Adam Hanft, a marketing and branding expert.

There are some positives to the strategy, Hanft said. Not only are ratings up, but NBC will "have another bite of the apple because the replacement shows are going to get a lot of attention and scrutiny than normal pilots would."

"NBC has handled this as best as they can. At the end of the day, this is entertainment and this is a business," Koch said, "so the strategy is, two of our top comedians make fun of us."

But even if this was a part of NBC's master plan, they're still not using it to their advantage, Hanft said.

"The bigger long-term issue is that clearly the NBC brand has been damaged. When you have your talent mocking you, it's embarrassing," Hanft said. "Being an old brand doesn't give you any insulation anymore. They're making a big mistake by not being visible and vocal and engaging in the conversation. There's nothing to be embarrassed about because something didn't work."

He said if NBC was smart, it would find a way to make even more fun of itself, arming Twitter with comedy writers and emphasizing the idea that while they made a misstep, at least they took a risk.

"Then they would come across as the network that's so transparent and open-minded they don't mind their talent railing against them," he said.

Still, regardless of the results of the late-night battle, Koch thinks the network will recover.

"It's not like NBC is some new company. My gut feeling is that [NBC] is keeping quiet because they're in the mix still, trying to figure things out," she said. "And common sense is that you don't say anything when you don't know what you're doing."