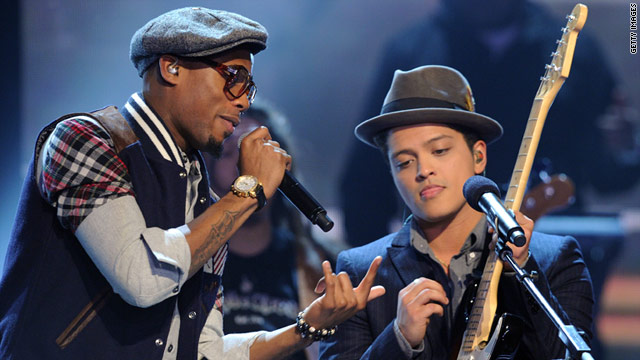 At a mercifully short, hourlong televised event broadcast from downtown L.A.'s Club Nokia, nominees such as Katy Perry, Bruno Mars, B.O.B and others performed hits that lit up radio and the internet the past 12 months in an effort to drive interest in the awards show on February 13, 2011.

Other artists in attendance simply took in the Wednesday's show (hosted by "NCIS Los Angeles" star LL Cool J) and made the press rounds to discuss their subsequent nominations.

"It's been an incredible year, and I can't believe this is happening for me," said Mars, who walked away one of the evenings big winners with seven nominations.

At the Grammy nominations

Getting ready for the 2010 Grammys
RELATED TOPICS

"It's a little surreal," he added after the show in a short appearance before assembled media reps.

The singer, known for hits such as "Nothin' On You" (by rapper B.o.B featuring Mars on the vocal hook), emerged as Wednesday's biggest star as Eminem, who led all nominees with ten nods, was not in the proverbial house.

Mars performed twice during the telecast, which moved along at a brisk pace and suffered few clunky moments.

The one minor hiccup during the event was teen megastar Justin Bieber's interview via satellite from London with LL Cool J, which felt awkward to some ("I can't believe I'm in this position...I don't know what to say," Bieber said).

Regardless, the teen dream earned his first Grammy nomination for Best New Artist, and his dedicated followers took to Twitter by the thousands to express their elation immediately following the news.

Meanwhile, another big winner was soulful singer Cee-Lo, who locked in four nods, including Record and Song of the Year.

"If I win I'll be graceful about it," he said after the show. Early this morning the singer hit Hollywood hotspot Drai's atop the W Hotel Hollywood to celebrate with friends at electro-rap duo LMFAO's weekly "Party Rock Wednesdays" bash.

Unlike Grammy night, the nominations ceremony is not followed by wild after-parties. Train held a concert at Club Nokia immediately after proceedings, but no lavish label soirees took place afterward.

In a night with few surprises, relatively few shut-outs and no big bashes, hometown girl Katy Perry provided some spark. The singer received four nominations and kicked off the show clad in a sparkling gold dress with her "California Gurls" sans Snoop (the performance, like all the musical numbers shown last night, was actually a pre-taped segment shot Tuesday evening).