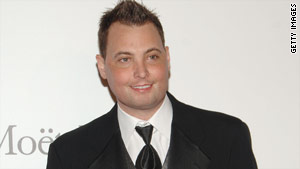 Rich Cronin, pictured in 2007, died Wednesday in a Massachusetts hospital after a long struggle with leukemia.
STORY HIGHLIGHTS
RELATED TOPICS

Cronin, who fought a long battle with leukemia, was 36.

The band is best known for its top 10 U.S. hits "Girls on TV" and "Summer Girls," with Cronin writing the latter.

Cronin was diagnosed with leukemia in 2005 and underwent chemotherapy, said bandmate Brad Fischetti.

The leukemia returned in 2007 or 2008, and doctors treated it with a stem cell transplant, Fischetti said.

Cronin suffered a stroke, an adverse reaction to the treatment, and was left with severe pain in his leg, according to Fischetti.

He did not know whether Cronin was battling leukemia again when he died in a Massachusetts hospital Wednesday, he said.

The trio had a monster hit with its debut album, LFO.

"Summer Girls," from the album, was the group's highest charting song and was nominated for a Billboard Music Award.

Fischetti said he and their third bandmate, Devin Lima, gave Cronin the large back bedroom of their tour bus so he could rest up for the shows.

"We had the best time ever," Fischetti said. "He never thought he'd be on stage again."

He said Fischetti told him recently he was having some trouble walking.

When Fischetti sent Cronin a text message last week to wish him a happy birthday, he did not get a reply -- which he said was uncharacteristic.

He found out Wednesday morning that Cronin had died.

He chuckled that some media outlets have been reporting Cronin's age as 33.

"Rich liked to play with his age," he said.