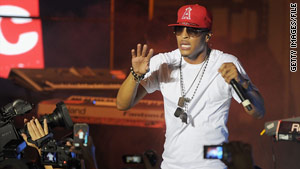 Police arrested T.I., whose real name is Clifford Harris, and his wife, "Tiny" Tameka Cottle, during a traffic stop on Sunset Boulevard in West Hollywood on Wednesday night.

During the stop, police said, they smelled an odor of marijuana coming from the couple's car.

Harris and his wife were released Thursday morning on $10,000 bail, according to his lawyer.

Their mug shots will not be made public until investigators confirm through lab tests that the seized substance was an illegal drug, sheriff's spokeswoman Nicole Nishida said,.

Steve Sadow, the Atlanta, Georgia, lawyer who represented Harris in his federal firearms case in 2008, was coincidentally in Los Angeles, where he is the lead defense lawyer in the Anna Nicole Smith drug trial.

He and Christopher Smith, his Los Angeles co-counsel in representing Smith defendant Howard K. Stern, will also represent Harris and his wife in the newest case, he said.

"It was a late night," Sadow said at one point in the Smith trial Thursday morning.

Harris will have an initial hearing in November since he has already posted bond, Sadow said.

Sadow would not comment on what affect the drug arrest might have on Harris' probation in the federal conviction.

"Well, I'm just ready to put the bad things behind me and look forward to the future and, you know, just move forward and evolve -- continue to evolve," he told CNN's Larry King earlier this year.