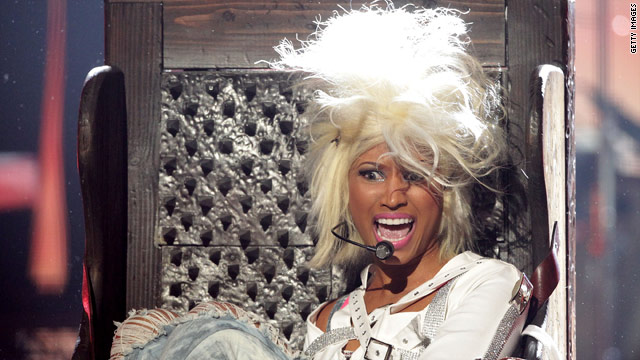 (CNN) -- Three years ago, Nicki Minaj was getting fired from jobs more often than she was paying her rent on time.

The Trinidad-born, New York City-raised artist has written lyrics about having an alcoholic father who once tried to burn down the house with her mom inside.

Certainly, Onika "Nicki Minaj" Maraj seems to be an unlikely candidate to become one of the most intriguing hip-hop artists of today.

After spending the early part of her childhood at her grandmother's house, Minaj eventually landed in Queens with her parents. By the third grade, she already had an affinity for singing and acting and would later attend the famed LaGuardia Arts High School to study drama.

"I was thinking in my head I was going to be a famous actress," Minaj says. "When I got out of high school, I didn't really want to take time and go and audition, I just wanted to get a job and work and get my own place."

Minaj quickly became bored with the nine to five and decided to give rap music a shot.

A friend in her neighborhood asked Minaj to write a hook for his song, and the young 20-something delivered a chorus and verse that left her collaborator in awe. Figuring if she really put her mind to it that she could succeed in rap, Minaj decided to quit her last job. And then she told her mother.

"I will never forget the panic and fear in her eyes," she says. "My heart just frickin' collapsed for a second. My mother was always like, 'Yeah, you can do anything,' but her eyes couldn't lie ..."

Today, Nicki Minaj is one of the most influential female artists in hip-hop's male-dominated landscape.

She is signed to Lil' Wayne's Young Money label, has won two BET Awards and is up for best new artist at this year's MTV Video Music Awards. Minaj has also had eight songs land on Billboard's Hot 100 singles chart, including three in the Top 10. Her current single, "Your Love," sits atop the rap charts, and she has collaborated with everyone from Mariah Carey to Kanye West.

And all of this comes before Minaj has even released her debut album ("Pink Friday" drops on November 23). It is for this very reason that growing skepticism seems to follow Minaj's every move and lyric.

Some cynicism stems from Minaj's relationship with her mentor, Lil' Wayne, whom she calls her biggest influence in all aspects of the music business.

Before she met Lil' Wayne, Minaj was on the mixtape circuit, even pushing DVDs to get the word out. Lil' Wayne caught wind of Minaj's first disc and wanted the artist to be the girl in his Young Money camp.

Minaj has no problem the admitting that she and Lil' Wayne had a "very weird relationship" in the beginning.

"People told me, 'Wayne's just saying that because he wants to get in your pants,' " she said. "I heard a lot of that, so I really distanced myself away from him."

Aside from sending each other verses for their respective songs and brief conversations here and there, Minaj would go months without hearing from Lil' Wayne.

"We just became great friends because I got to know him and his sense of humor, and I no longer felt uncomfortable," she says. "I realized this dude just wants to make a mark in music, and he has a great eye and a great ear for hip-hop."

Minaj says her role with Young Money and her career really began to get serious nine months ago.

Even if you don't know her name, chances are you've heard or seen Nicki Minaj in the last year because, frankly, she's hard to miss. Whether it's her assortment of multicolored wigs, the arsenal of voices she uses, name-dropping Anna Nicole Smith or her legion of fans known as Harajuku Barbies, Minaj's larger-than-life persona has garnered praise and disdain from listeners and artists alike.

Minaj says she couldn't care less about her detractors.

"The people that are inclined to hate are also inclined to be losers. A loser could never congratulate a winner - it's not in them" she says.

Often the truth in Minaj's career is trumped by the rampant rumors swirling around her love life, sexuality and lofty comparisons. Kanye West has said she has the potential to be second-greatest rapper of all time, next to Eminem. Irv Gotti has compared her to Lauryn Hill.

In regards to the latter, Minaj isn't as humble as one might expect.

"Irv has been privy to hear things that I've done that the world hasn't heard," she says. "Based on the music I have out now, that sounds like an absurd comment, but when 'Pink Friday' comes out, you will completely understand why Irv made that comparison."

While Minaj loves the praise, she knows that speculation often isn't far behind. When a photo of Minaj holding hands with her friend and adviser, Diddy, surfaced on the internet, blogs were in frenzy over the idea Minaj was dating the entertainment mogul.

"You know how you look at your older brother? That's how I look at Diddy," she says. "When people say that, it makes me gag. He's my friend, and he's sweet and he's a great guy, but I could never see him that way."

And for the record, Diddy is not her manager, she says.

"I am very optimistic person, and that's the only thing that gives me sanity," she says about those questioning her apparent quick ascension in the business.

"The people who still feel Nicki needs to prove herself -- I agree with them. I love the fact that people still feel like, 'Show me more, give me more,' because that's what I was born to do."