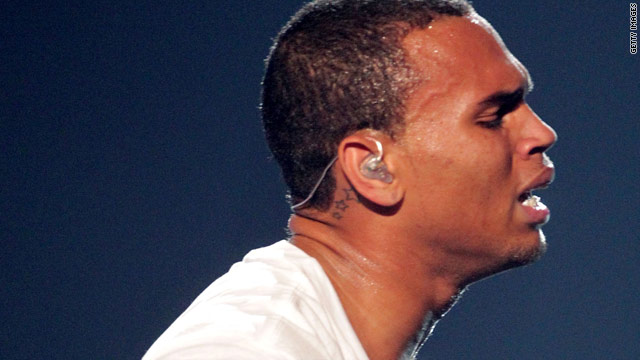 Chris Brown was overcome by emotion while singing Michael Jackson's "Man in the Mirror."
STORY HIGHLIGHTS

(CNN) -- Sunday night, R&B star Chris Brown, who has been keeping a low profile since pleading guilty last year in the assault case involving his former girlfriend Rihanna, broke down while performing a surprise tribute to Michael Jackson at the BET Awards.

The BET Awards audience was very much on Brown's side, helping him sing the lyrics to "Man in the Mirror" when he was overcome with emotion. But if reaction from pop culture observers and commenters is any indicator, he still has a ways to go.

The Los Angeles Times ran a survey on its Goldderby awards website, headlining the story, "Was Chris Brown faking it at the BET Awards?" Though close to 40 percent believed he was completely sincere, about 21 percent said he was faking -- and another 12 percent believed he was overdoing his emotion and overwhelmed by it at the same time. (A similar question is being asked by HLN's "Showbiz Tonight.")

Video: Stars come out for the BET Awards
RELATED TOPICS

Kirthana Ramisetti, managing editor of the pop culture site Predicto.com, says that Brown may have pushed things too far with the "Man in the Mirror" performance, which followed a series of dance routines to other Jackson songs.

"I think people felt, in terms of the dance tribute he did, I think people enjoyed that and were reminded that in spite of his past behavior and actions that he's a talented person," she says. "But when he started crying, you get a mixed reaction as to what's motivating that."

The theories about a calculating Brown don't surprise Janee Bolden, senior editor of the African-American celebrity gossip site Bossip.com. "Everybody's been very critical of every move he's made since the incident before the Grammys," she says.

But, she says, there was plenty of support for Brown at the awards show, and she believes it's a "great first step" in reviving his career.

Night of the comeback at BET Awards

"It was one of the best performances of the night," she says. "Everybody stopped what they were doing and watched, and you kept hearing over and over again [from his fellow performers] 'Chris Brown is back' and 'Let's give him a chance.' "

It's been a challenging year for Brown, to say the least. The Rihanna assault, which took place the night before the Grammy Awards, made the singer a pariah to many of the fans who had helped put him on top of the charts.

Last August, six months after the Rihanna incident, he was sentenced to serve five years probation and to spend more than 1,400 hours in "labor-oriented service" for the assault conviction. He worked 32 days of hard labor in Richmond, Virginia, according to that city's police chief.

A restraining order requiring Brown to stay 50 yards away from Rihanna, 10 yards if the two are at the same industry event, remains in place until 2014.

His career has yet to reach its former heights. In December, he released his latest album, "Graffiti." Reviews were, at times, merciless -- the Chicago Sun-Times Jim DeRogatis called it "thoroughly mediocre and at times just garbage" -- and to date, it has sold fewer than 500,000 copies, poor even in a time of diminished album sales. None of its singles have hit the Billboard Top 10.

Authorities haven't been much kinder. In early June, British officials barred him from entering the United Kingdom to perform, a decision based on the Rihanna case.

Brown, who turned 21 at the beginning of May, often hasn't helped his case. He's been a frequent social network user, often using services to either apologize or vent -- that is, when he wasn't leaving them entirely. (He quit Twitter late last year, only to rejoin in March.)

He apologized again at the BET Awards, telling the crowd, "I let you down before but I won't do it again, I promise."

"I think Chris Brown needs to stop being on the defensive, and just let his talent speak for itself," says Ramisetti. After all, she notes, any number of celebrities have made mistakes, but the public is generally forgiving -- if you give them time to forgive.

Bolden, whose site has made much of every Brown misstep, adds that he should take things slowly and more quietly.

"He's just a kid, and that's what people have to remember," she says. "You really don't want to do anything, if you're in his position, that reminds people of what happened. ... Only time will tell. Hopefully he can mature a little bit. There needs to be somebody in his camp guiding him to be a little more careful."

Perhaps Gucci, a commenter on the Bossip site, put it best.

"I think he's been forgiven a while ago. ... He just hasn't forgiven himself," and "that's why he won't act like he has damn sense," the commenter wrote.

"Stop with the [Twitter] rants, the pointless interviews, and the [whining] and just dance!"