'A Day in the Life' lyrics to be auctioned 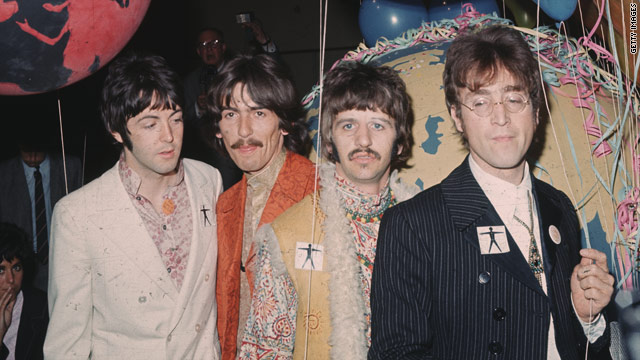 The Beatles take part in a TV special in the summer of 1967, shortly after the release of "Sgt. Pepper's Lonely Hearts Club Band."
STORY HIGHLIGHTS
RELATED TOPICS

New York (CNN) -- John Lennon's autographed lyrics for "A Day in the Life" -- one of the best-known songs from an iconic album -- are expected to sell for more than a song when they go up for auction at Sotheby's New York on June 18.

The double-sided single sheet of paper written in Lennon's hand includes cross-outs and corrections, and chronicles the evolution of one of the most famous musical masterpieces by the Beatles.

"A Day in the Life" was the final track of the Beatles' legendary 1967 album "Sgt. Pepper's Lonely Hearts Club Band." The album spent 27 weeks at the top of the British charts and 15 weeks at No. 1 on the American Billboard 200.

The album is considered a turning point in the career of the Beatles, transforming them from pop icons to one of the 20th century's leading artists.

Rolling Stone magazine has ranked "A Day in the Life" as No. 26 on its list of the 500 Greatest Songs of All Time.

Rolling Stone Assistant Editor Andy Greene said he thinks the song and the album deserve higher praise, considering it was the last album the Beatles collectively worked on together.

"That album was the beginning of the album era," Greene said. "It was the big bang of albums. This was the first concept album. All the songs go together to tell a story, and it's inspired every musician." 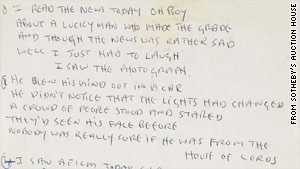 The auction house said the collector plans to use the proceeds to buy a vineyard.

The first side of the lyrics -- which are believed to have been composed on the morning and afternoon of January 17, 1967 -- features a rough draft written in script with a black felt marker and blue ballpoint pen, with a few annotations in red ink. The other side of the page, whose ink is also bright and vibrant, is written in block letters, according to Sotheby's spokesman Dan Abernethy.

Both versions begin with the same familiar line: "I read the news today, oh boy."

The day of the auction, June 18, will be the 68th birthday of "A Day in the Life" co-writer Paul McCartney. McCartney's "middle eight" -- the part beginning "Woke up/fell out of bed" -- was added when he and Lennon decided to combine unfinished songs, creating the final version of "A Day in the Life."

Rolling Stone's Greene said he didn't seem fazed by the expected sale price for the lyrics.

"I can see why it's worth that," he said. "Beatles stuff always sells well. It is the crown jewel of the Beatles collection."