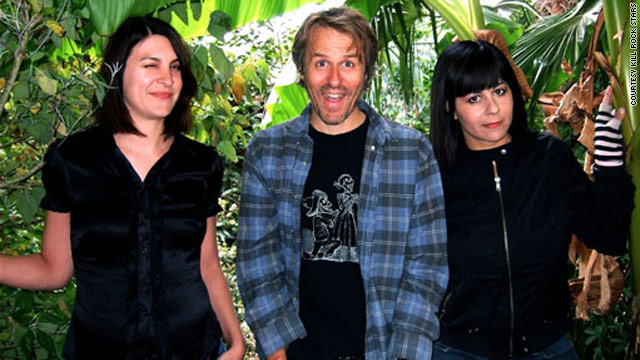 "American Gong" (Kill Rock Stars), the latest album from the Portland, Oregon, band, does not jump from your speakers so much as it detonates them. The group's eighth studio album finds the band moving even further from its drums-and-keyboards '90s sound to a raucous, primal guitar-rock record.

In some ways, the change is not unexpected, given the roots of Quasi's personnel. Songwriter, singer and guitars/keys specialist Sam Coomes was in Heatmiser with Elliott Smith (and played on his solo records) and regularly contributes to Built to Spill. Janet Weiss' old group Sleater-Kinney was regularly ranked among the best bands of the late '90s. Joining them is Joanna Bolme of Stephen Malkmus and the Jicks.

Quasi established a cult following in the mid-'90s with albums that featured Coomes' Rocksichord (think Bach through a fuzz pedal) and Weiss' drum-kit pulverization, along with Beatle-worthy harmonies and melodies belying brutally honest (and often austere) lyrics.

The Quasi of 2010 has moved on, mostly. Coomes, who once wrote a song with the chorus "it's gone so wrong/I give up" now has a chorus that asserts "rise up/out of your hole" on "Gong." He's also somewhat shed the keyboard and created a sinister, guitar-driven sound.

"Sam is a guitar player deep down. There's a swagger we have when he plays guitar. He likes things wild and frenetic; he likes things to stand out," Weiss says.

Bolme fuels the band's sound with a tighter rhythm and, Weiss says, "I hum those bass parts on the new record more than anything else."

And Weiss? She continues her steady violence of the skins and shrugs off her importance to the band. "I play drums. I sing. I own the van. I'm less likely to get kicked out if I'm more valuable."

Coomes and Weiss, once a couple but now divorced, acknowledge their 18 years as band mates haven't been easy ("it's been a bumpy ride," Coomes says), but the band is grateful for what they have accomplished.

The band is on tour and will start a swing of the Eastern U.S. on Thursday. CNN sat down with all three members before a recent show in Los Angeles.

CNN: At which point did you two realize that you two had that musical chemistry?

Coomes: She was really raw but good, and I could tell she was reaching for the same things I was reaching for, even at the beginning. It's just intuitive -- not even bells ringing like "this is it," but it's the echoes of bells over the hills somewhere and you just go after it.

CNN: It seems like a well-oiled machine from the get-go, on the records. ...

Weiss: Early on there was tension. But I think that I became the drummer that I am because of what Sam wanted in his songs. I'm not afraid to kick up some dust back there, and that's because he encouraged me to do that.

Coomes: I think it's great that your perception [is] that we were a well-oiled machine because in reality -- it's been a very bumpy ride. Rock 'n' roll bands tend to have a lot of turbulence, and we're no exception to that. But if it sounds together, that's great.

CNN: What was it like for you to come into this machine?

Bolme: The machine needed a different oil. It was pretty easy actually because I've known them since 1991. I've played in other bands with Janet so it was relatively easy for me just because I was already halfway in there.

CNN: I've heard "American Gong" is the most collaborative thing that you guys have done. Why?

Coomes: I'm older. I used to want to try and control the process a lot more, and I've been taught and eventually learned that it's better to open things up.

Weiss: He gave up a lot of control on this record. Even in the studio. Joanna was a recording engineer for many years, and Sam would say, "You guys decide what mics would sound best." He never did that before.

CNN: Lyrically, not to read too much into it, but there's the "I'm never going back again" and "I'm not mad anymore ..."

CNN: Am I reading too much into it, Sam? Some truth to that?

Coomes: There's truth to it, but ... truth is a funny thing. You got to factor in that you feel a certain way at a certain time and -- boom -- there's a song. A couple of weeks later you feel different, you still have the song ... but you might not feel the same way. The truth shifts around. It's a gigantic amoeba.

CNN: I would be threatened if I didn't ask about a Sleater-Kinney reunion.

Weiss: Maybe someday. I'm prepared to wait awhile -- when those million-dollar offers come in (smiles). It's not going to be this polished, moneymaking machine. We've never been that. The reunion will be just as out of control as it always was. [But] we're all happy where we are at the moment.

CNN: Was there something that you weren't getting from your other bands that made you turn to this?

Coomes: Well sure, every band is different. I'm grateful for the success [Quasi] has had, but it's ... always been pretty marginal as far as the financial angle goes. The good thing about this band is because we never had a direction, Quasi just is whatever we need it to be. ...

It's never drudgery or a chore. It's always something that is open and has some sort of promise for us.

Weiss: I think this band has low stress in a lot of ways. We do just primarily do it because we like it. We get along and now, with Joanna, it's made it less intense and more fun. It feels like a new band. But now -- we're a well-oiled machine.