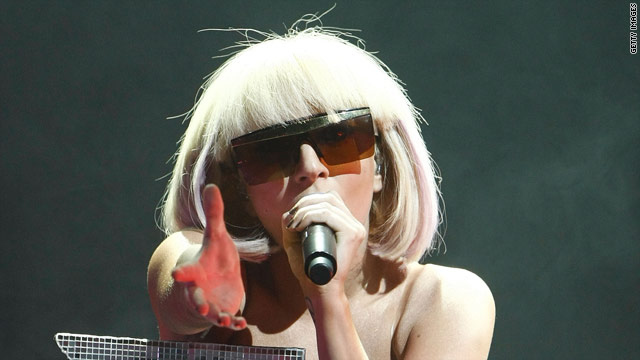 Lady Gaga is being sued by her former producer, who claims the singer ditched him after she became popular.
STORY HIGHLIGHTS

(CNN) -- Lady Gaga's former boyfriend, producer and business partner, is suing the pop star for $30.5 million, claiming he was pushed away after their failed romance.

"We have no comment," Lady Gaga's publicist told CNN on Thursday night.

Lady Gaga, one of the world's hottest recording acts, won two Grammys this year for her debut album.

Robert Meloni, Fusari's lawyer, borrowed a line from William Congreve's tragic play "The Mourning Bride" to set the stage for his arguments.

"Heaven has no rage like love to hatred turned, nor hell a fury like a woman scorned," Meloni said.

Lady Gaga was the woman scorned when Fusari ended their romance, according to the suit.

"All business is personal. When those personal relationships evolve into romantic entanglements, any corresponding business relationship usually follows the same trajectory so that when one crashes, they all burn. That is what happened here," the suit said.

The story starts with 20-year-old Germanotta riding a bus from Manhattan to Fusari's studio in Parsippany, New Jersey, to work on music in the spring of 2006.

"Fusari was expecting someone a little more grunge-rocker than the young Italian girl 'guidette' that arrived at his doorstep and was worried that he had made a mistake," the court papers said.

"Fusari then asked her to play one of her songs on the studio piano and within seconds, (he) realized that Germanotta had star potential. The trick would be coaxing it out of her."

"He pushed her to explore different musical genres," it said. "Over the course of the next several months, Germanotta commuted from New York to Jersey seven days a week, radically reshaping her approach. They put their focus on writing music and finding a sound for her."

Fusari takes credit for convincing her "to abandon rock riffs and add dance beats. He demonstrated how the sound of a drum machine would not hurt the integrity of her music."

The suit claims Fusari created her stage name by accident. A text message intended to read "Radio Ga Ga," named after the Queen song, was changed by spell check on his cell phone to "Lady Ga Ga," it said. "Germanotta loved it and 'Lady Gaga' was born."

Their romance grew as they were "working intensely in such close emotional quarters," it said. Germanotta and her father soon signed a contract with Fusari giving him a 20 percent share of her career, the suit said.

The romance declined after Lady Gaga gained and then lost a record deal with Island Def Jam, it said.

"The couple was now constantly bickering as Germanotta became more and more verbally abusive towards Fusari," the suit said.

"Fusari wanted to return their relationship to a purely professional level, so in January 2007, he ended their romantic involvement."

After Lady Gaga got a new recording contract in May 2007 with Interscope, she stopped answering Fusari's phone calls, it said.

Still, he co-wrote and produced four songs on Lady Gaga's debut album "The Fame," including the hit "Paparazzi."