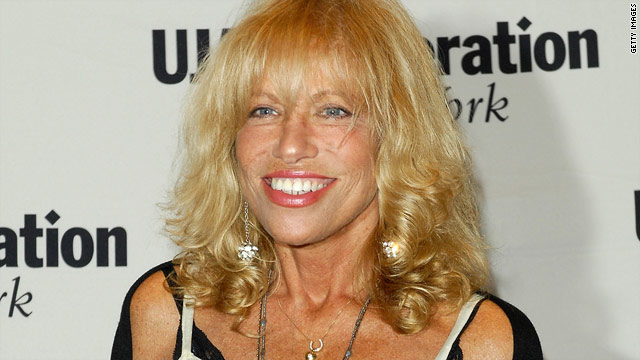 Carly Simon's "You're So Vain" hit No. 1 in early 1973, and is still talked about today.
STORY HIGHLIGHTS
RELATED TOPICS

(CNN) -- Has Carly Simon finally told the world the subject of "You're So Vain"?

In a new version of the 1972 hit song from her album "Never Been Gone," the singer whispers a name during an instrumental break. Played backward, the name is revealed to be "David."

Simon, 64, gave an interview to Uncut magazine about the backward whispering, which prompted the U.K. tabloid The Sun to report that "David" is record executive David Geffen.

But Simon's publicist disputed the theory.

"The man's first name is David," she told CNNRadio, "but it could be one of many Davids."

The Sun's theory revolves around the idea that Simon recorded the song to express displeasure at Geffen's signing of a rival, Joni Mitchell, for his record label, Asylum Records. Simon wasn't on Asylum, but her label, Elektra, merged with it in 1972, the year her album "No Secrets," containing "You're So Vain," was released. Geffen was put in charge of Elektra/Asylum.

Simon is on record as being uncomfortable with Geffen. In Jac Holzman's oral history of the label, "Follow the Music," she said, "[The merger] was devastating. It was like I was a child of divorce -- my father was leaving me and now I had David Geffen as a stepfather."

Simon has long played possum (to paraphrase one of her album titles) about the identity of the "You're So Vain" character, who travels by Lear Jet to witness an eclipse and, cuttingly, "probably think[s] this song is about you."

At one point she said he was a composite; other times she has maintained he has certain letters in his name. NBC executive Dick Ebersol paid $50,000 at a charity auction for the revelation and a live performance of the song.

Rumors have focused on Warren Beatty, Mick Jagger and Kris Kristofferson, among others. Beatty has said he believes it's about him.

In a 2002 interview with CNN.com, Simon said that "You're So Vain" wasn't the only song about the man, whomever it might be. "There are always clues in other songs. The guy has repeatedly appeared in my songs," she said.

Entertainment Weekly's Simon Vozick-Levinson described the new theories as "speculative." "There's not that much evidence that the David she's talking about is that David. ... David is a very common first name and there's any number of people she could be talking about."

The interest is timely and promotional, of course: Simon recently announced a contest on her Web site, CarlySimon.com, inviting fans and filmmakers to create a music video using the original or new version of her song. She will screen all entries herself, select a winner and meet the filmmaker, whose winning entry will also be premiered at the 2010 Tribeca Film Festival.

Whatever the answer is, Simon has been tickled that a song's puzzle -- now almost 38 years old -- could still have such a hold on the public.