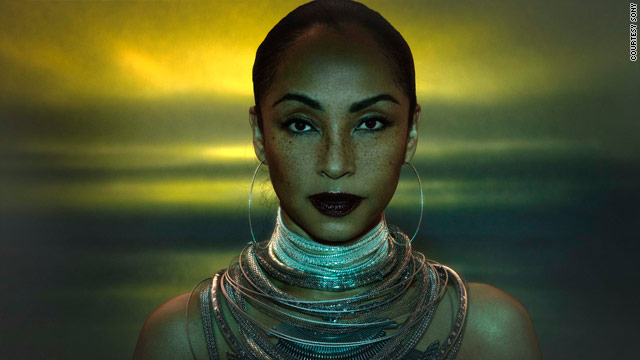 Singer Sade takes years off between albums, but that hasn't stopped fans from embracing her music.
STORY HIGHLIGHTS
RELATED TOPICS

She doesn't ordinarily sit down for extensive interviews. She almost never pops up on the red carpet or in the lenses of the paparazzi. And for someone known for her music, she hasn't released all that much of it.

Her new album, "Soldier of Love" -- which came out Tuesday -- marks only her sixth studio album in 25 years, and her first since the very successful "Lovers Rock," which came out in 2000.

Message boards and fans have been buzzing for months about her return.

"She has had an unusual career path, but I think for her it's worked because she sits outside of trends," said David Prince, news editor for Billboard.com. "She keeps it rare and special."

Technically, Sade is a band -- the singer and musicians Stuart Matthewman, Paul Spencer Denman and Andrew Hale along with drummer Pete Lewinson who has joined them on tour.

But ordinarily when people refer to Sade, they are talking about the smoky-voiced Helen Folasade Adu, daughter of a Nigerian father and an English mother.

A lot of us who were babies in the '70s, you might have had your first kiss to Sade [music] or your first fool-around to Sade.
--Fuse TV host Touré

Her first album, "Diamond Life," contained the hit singles "Smooth Operator," "Your Love Is King" and "Hang On To Your Love." It went multiplatinum and established her around the world.

Her performances over the years were lush in their understatement -- Sade resplendent, hair pulled back, jamming with her band. No guest rappers, no samples and no frenetic backup dancers. Just the music.

According to Billboard, all of her albums -- including a live album and a greatest hits album -- have made the Top 10, with "Lovers Rock" selling 3.9 million copies. She's also had eight Top 10 R&B singles in a row, including the latest, "Soldier of Love."

FUSE TV host Touré said Sade has carved an indelible path in the music industry and the hearts of fans.

"I think she's been a really important and valuable artist for a lot of us," Touré said. "A lot of us who were babies in the '70s, you might have had your first kiss to Sade [music] or your first fool-around to Sade. What a great story of an artist who can have a long career and not have a fall-off or some scandal and they're not the same anymore.

"In an era of over-sharing, here is an artist who has some mystique and who simply wants to share the music," he said.

That mystique has sometimes led to tales of everything from a nervous breakdown to drug and legal issues that some speculated kept Sade out of the limelight.

In a 1992 interview with Jet magazine, the singer said rumors that she had died made her "happy to be alive."

She's also happy to be hidden. "Having been travestied in print on many occasions, Sade rarely gives interviews," her Web site says. It then quotes the artist: "It's terrible this Fleet Street mentality that if something seems simple and easy, there must be something funny going on."

According to a recent interview with The New York Times, Sade has been living for the past five years in rural England with her partner Ian Watts, her 13-year-old daughter, Ila, and Watts's 18-year-old son, Jack.

Music journalist Sonia Murray said other artists might want to take a cue from Sade's approach.

"There are a lot of people we wish would go away that long and then come back and be great," Murray said. "Maybe she continues to just want to go back to the creative well and make people miss her. It's worked for her every time."

Sade isn't the only one who's managed a long layoff, Murray said. After an eight-year hiatus, singer Maxwell returned with the critically acclaimed "BLACKsummer's Night" album, which earned him two Grammy awards.

Prior to the Grammys, he told CNN he loves Sade and how she has handled her career.

"She's been gone for 10 years, and it's a good feeling when you can walk back into it after not seeing a friend for so long, and then you sit down to have lunch or coffee or whatever, and it's almost like time did not freeze," he said. "That is what I would love to have with the public -- is to be able to kind of go away and to come back, and it's as if no time had passed between us."

And while the music industry has transformed in her absence in an era where so many artists rely on tools like social networking to build their fan base, Murray said Sade has the advantage of being one of a kind.

"There has never been a 'new Sade' or a younger version of Sade," Murray said. "She has established herself as a brand and as a desirable entity, no matter what the year or what her age."

And Sade? She just wants her career to be about the music -- so enjoy her recent exposure while you can.

"I do want to get on the stage and sing the songs," she told The New York Times. "But then I just want to disappear again."