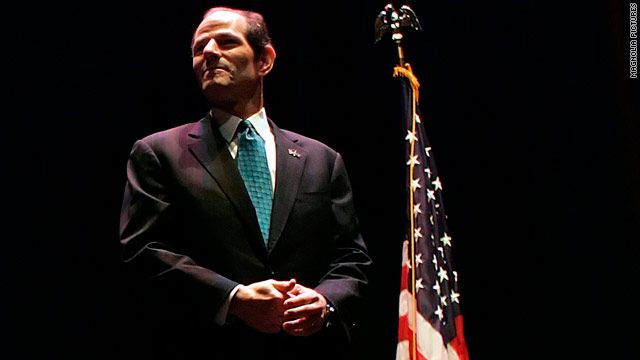 Eliot Spitzer says he believes the documentary "Client 9: The Rise and Fall of Eliot Spitzer" is fair.
STORY HIGHLIGHTS

(CNN) -- Eliot Spitzer has every reason in the world not to want to talk about it.

But talk he does in the new documentary, "Client No. 9: The Rise and Fall of Eliot Spitzer" opening Friday in limited release. The film is directed by Alex Gibney, whose work has included acclaimed documentaries "Enron: The Smartest Guys in the Room" and "Taxi to the Dark Side."

"Client 9" traces the prostitution scandal that ended Spitzer's term as governor of New York in 2008. Gibney interviews several of the people who became adversaries of Spitzer in the wake of his attempts to reform both Wall Street and Albany as well as one of the women Spitzer allegedly saw on multiple occasions.

Spitzer recently spoke with CNN about why he participated in the film, his thoughts on the theory that there was a conspiracy to topple him from power and what he has learned in the wake of the scandal.

CNN: Let's start with the obvious question of why did you agree to participate in the documentary?

CNN: Did you have any hesitation at all about dredging the whole thing up again?

Spitzer: If you begin with the premise that he was making the movie, it just seemed to me to make more sense to participate and present the facts as I saw them.

CNN: What did you think of the film?

Spitzer: I'm neither a film critic nor in this case the best person to pass judgment, but I thought it was a fair story.

CNN: I'm sure you would rather move on in your life, but what is it like to watch this situation play out again on the big screen and know that filmgoers will do the same?

Spitzer: Look, you go on with your life and you learn to do what you are interested in and focus on what you are doing. You realize that other things will be going on but they are not the things I am focusing on.

CNN: The film, or at least the trailer, makes it appear that there was this whole conspiracy [by Wall Street titans] to bring you down. What are your thoughts about that?

Spitzer: What I've said throughout this is that I resigned because I thought it was the appropriate step to take in the context of what I had done, whether there were other things going on or what others were focused on.

CNN: How were you approached about being in the film?

Spitzer: Honestly, I can't remember. I presume I got an e-mail or a phone call. I'm sure Alex knows somebody I know and someone said, "Hey they are doing a documentary on your life and isn't that a nice thing to hear?"

One way or another I ended up on the phone with Alex and we chatted. I think there were several conversations that finally resulted in agreeing to sit down with him.

CNN: Did you have any rules going in about things you wouldn't discuss?

Spitzer: I don't recall that there were any ground rules.

CNN: How does it feel to be "infamous"?

CNN: Why did you want to be a part of your CNN show "Parker Spitzer?"

Spitzer: It is great fun. It's informative.

It is an effort to bring a smart debate and conversation to the air every night at 8 o'clock rather than a linear, sort of ideologically driven presentation that other networks have and I say that with a great deal of respect for what they put on the air and admiration for how they do it. But this is an effort to give the viewer both sides of the debate.

CNN: Now that the scandal is over, you've moved on and you have a new show, what do you feel like you have learned?

Spitzer: Life is peaks and valleys. I think we all are aware of that and it's better to be at a peak, but often you learn more in the valley. You go forward trying to do what you care about and taking care of the people you care about. It's not very complicated.

CNN: You say it's not very complicated, but from the outside looking in it seems a bit complicated.

CNN: What do you hope people take away from this film?

Spitzer: Certainly I hope they appreciate that when I was in government we did what mattered for the public on views that seemed important then, but I think have become even more important, and the sense that we fought awfully hard for the public both as attorney general and governor and focused on what was important.

I saw the rough cut and what they showed at the film festivals. I don't know how much it differs from the final version, but I think some of that certainly came through in the movie and I hope [viewers] do take that away with them.