Actress who played Bonnie Blue Butler in 'GWTW' dies at 76 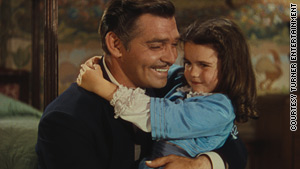 Cammie King Conlon said she recalled little from the movie but had a recollection of Clark Gable.

But what a peak.

Conlon was four years old when she portrayed the ill-fated Bonnie Blue Butler in the 1939 blockbuster film "Gone With the Wind." Three years later, she voiced the part of the doe Faline in "Bambi."

After that, she departed show business and eventually had a family and a new career. As she grew older, Conlon was a gracious link between the film and its millions of fans.

Those fans are mourning the passing of Conlon, who died of lung cancer Wednesday in Fort Bragg, California, where she lived for about 30 years, said friend and family spokesman Bruce Lewis. Conlon was 76.

Conlon, credited in the movie cast as Cammie King, was picked to play the daughter of Rhett Butler (Clark Gable) and Scarlett O'Hara (Vivien Leigh) in the 1939 adaptation of the classic novel by Margaret Mitchell.

"I'm a very lucky person," Conlon told the Press Democrat in Santa Rosa, California, last year. "[The film] has added dimension to my life. Of all the little girls, they picked me."

She was very giving and patient with fans
--Connie Sutherland, director of Marietta Gone With the Wind Museum
RELATED TOPICS

She earned $1,000 for her few scenes, she told the newspaper.

In the movie, Bonnie Blue Butler was her daddy's little girl, winning comfort from him when she was afraid of the dark.

Bonnie's death while riding a pony was a blow from which the tumultuous couple could not recover.

As an adult, Conlon had a family and eventually moved to Fort Bragg on California's north coast, where she was a publicist, promoted filmmaking in the area and served as a museum executive director, Lewis said.

"She made her mark. She used her fame to give back to the community" through fundraisers, Lewis said.

Conlon once talked to a school class about the Civil War and would have a "Tea With Bonnie Blue" every year.

She made many appearances around the country and was popular with "GWTW" fans, known as "Windies." Conlon, who published a memoir in 2009, recalled little from the movie but had a recollection of Gable, Lewis said.

The family is planning up to three memorial services, including one at the Marietta Gone With the Wind Museum in Marietta, Georgia.

"She was a warm person," said Sutherland, adding their friendship was not based on Conlon's celebrity. "She was very giving and patient with fans."

The blue dress worn by Conlon in "GWTW" survives at the Harry Ransom Center at the University of Texas, says memorabilia collector Herb Bridges, who has many items on display at the Road to Tara Museum in Jonesboro, Georgia.

Bridges, who years ago sold much of his collection for $350,000 at Christie's, told CNN that Conlon was a relative latecomer to the "GWTW" shows circuit. "She was a delightful person."

Conlon, who was widowed and divorced, is survived by two children and three grandchildren.

Few key members of the "Gone With the Wind" cast are still alive.

Olivia de Havilland, who played Melanie, is 94 and lives in France. Ann Rutherford, who played Scarlett's sister, Carreen, is 89.