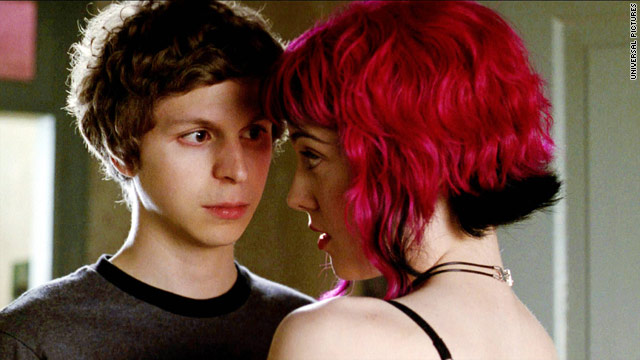 (CNN) -- The hipster's event movie, "Scott Pilgrim vs. the World" is an anti-blockbuster, an amped youth comedy that's so far out of the mainstream it's not only filmed in Toronto, it's set there too.

These days even hipster movies come out of comic books. And they can stretch to include wiz-bang digital effects, just so long as they're delivered with an ironic wink, or a "Batman"-esque "Kappow!"

The big joke in Bryan Lee O'Malley's slacker odyssey - and it's a good one - is that when his under-employed underground hero (the cutely anxious Michael Cera) takes up with a cool American girl, Ramona Flowers (Mary Elizabeth Winstead), he must fight it out with her seven exes in videogame-style battles.

Are these dreams, hallucinations, or fantasies? Could Scott be the hero of his own computer game without even knowing it? O'Malley doesn't say and doesn't care. The fights are as real as anything else in Scott's rather blurry life -- and more interesting than most of it.

Take away the ghosts of boyfriends past and the only thing you have going on in this "epic of epic epicness" is Scott's fledgling music career -- he plays bass in indie-wannabes Sex Bob-Omb --and his mildly guilty conscience for momentarily two-timing his previous sort-of girlfriend, 17-year-old Knives Chau (Ellen Wong).

He's at that age (22) when real life hasn't taken hold yet. When you can get by sharing a one-room, double-mattress apartment with your gay pal because it fits your non-existent income and fail to comprehend that your new girlfriend might be unimpressed with the arrangement.

O'Malley has lucked into his ideal interpreter in the English director Edgar Wright. Wright's films were the spoofs "Hot Fuzz" and "Shaun of the Dead," and he inspired a cult following of his own for the innovative, pop savvy sit-com "Spaced."

Many of the stylistic tics from "Spaced" reappear in "Scott Pilgrim," but they're so much of a piece with O'Malley's quirky line in comic book cool that it's hard to say what came from where. Pop-up info bites, quickfire cutaways, and obsessive fanboy references to games and TV are the order of the day. Wright cheekily drops in the theme music from "Seinfeld" and the Nintendo game "Legend of Zelda," and if you don't get both these gags then you're probably not going to enjoy this movie.

All of Wright's comedy is about the gap between the ordinary couch-potato lives most of us lead, and the exciting big screen version playing out in heroes' heads. He's a perfect fit for this movie.

Full of fresh, sharp touches and nonchalantly brash performances (from Kieran Culkin, Jason Schwartzman and Anna Kendrick, among others), "Scott Pilgrim vs. the World" consistently hits the sweet spot even if you're ready for Scott to take it up to the next level some way before the climax.

A bit more face time with Ramona wouldn't go amiss either. But those are minor gripes. I promise you, it's way more fun than the grown ups are having in the screen next door.