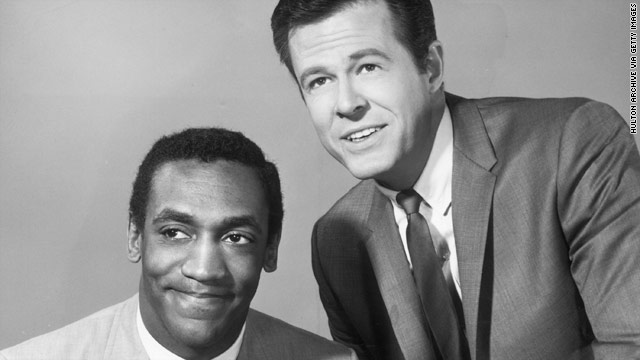 Robert Culp, right, and Bill Cosby starred as partners in the '60s TV show "I Spy." Culp said it was the most fun he ever had.
STORY HIGHLIGHTS
RELATED TOPICS

Los Angeles, California (CNN) -- Robert Culp, the actor who rose to fame as secret agent Kelly Robinson on the groundbreaking 1960s TV series "I Spy" and later played Ray Romano's father-in-law on "Everybody Loves Raymond," has died. He was 79.

Culp died after falling on a sidewalk near a Los Angeles park, said his publicist, Dick Delson. Delson had no further details.

The versatile Culp not only acted in "I Spy," which aired on NBC from 1965 to 1968, he also wrote several episodes. The series, which also starred Bill Cosby as Robinson's partner (and, as their covers, trainer to Culp's globe-trotting tennis player), was the first to feature an African-American in a lead role; Cosby won three Emmys for his work.

"I never had so much fun in my life, never, before or since," he said of "I Spy" in a 2007 interview with the Academy of Television Arts and Sciences' Archive of American Television.

But Culp could be hard on himself, he said -- material he channeled into Kelly Robinson.

"There are a lot of flaws in Kelly Robinson, much more than you see in the ordinary leading character on a TV show," he said. "Those all come from inside. Those are all part of me."

Culp collapsed near the lower entrance to Runyon Canyon Park, a popular hiking area in Hollywood, according to a Los Angeles Police official.

He was pronounced dead at a hospital a half hour later, Officer Rosaria Herrera said. It was unclear if the fall caused his death, and the coroner has opened an investigation, she said.

Culp made the transition to motion picture actor with mixed success. He starred in 1969's "Bob & Carol & Ted & Alice," a talked-about film about spouse-swapping couples, as well as 1971's "Hannah Caulder," opposite Raquel Welch, and 1972's "Hickey & Boggs." Later in his career, he also appeared in "The Pelican Brief" (1993).

But he was most often seen on television, appearing in dozens of series episodes and TV movies over his 50-year career, starting with scores of episodes of Westerns and Golden Age dramas in the '50s and early '60s.

His notable credits include a co-starring role in the series "The Greatest American Hero" and appearances on "The Cosby Show," "Columbo," "Wings," "Chicago Hope" and "Raymond."

Culp is survived by his fifth wife, Candace Faulkner.

His five marriages produced five children and five grandchildren, according to his Web site.

CNN's Jack Hannah and Alan Duke contributed to this report.