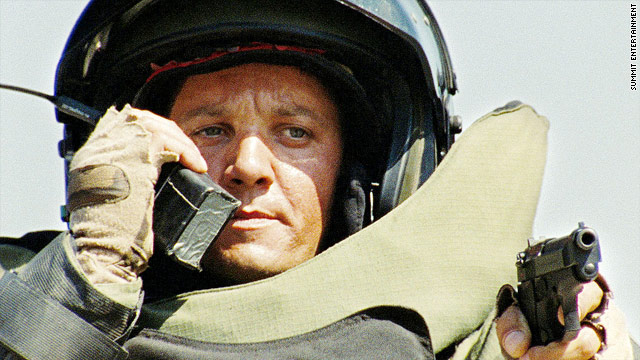 A soldier is claiming the character played by Jeremy Renner, above, in "The Hurt Locker" is based on him.
STORY HIGHLIGHTS

(CNN) -- A U.S. soldier who defused roadside bombs in Iraq wants credit for inspiring the main character in "The Hurt Locker," a movie up for nine Oscars this weekend.

Master Sgt. Jeffrey Sarver filed a federal lawsuit Tuesday claiming writer Mark Boal -- a journalist embedded with his Army unit in Iraq -- based the film's main character on his life.

Without directly denying Sarver's claim, the production company said it was "a fictional account of what brave men and women do on the battlefield."

Summit Entertainment said it hoped "for a quick resolution" of Sarver's claims.

"The Hurt Locker" is one of this year's 10 best picture nominees and it has been widely acclaimed by critics.

Sarver held back announcing his lawsuit until late Tuesday after all Oscar ballots were cast, Fieger said.

"We want the movie to be successful, because that is in my client's benefit," he said.

Sarver wants the opening credits to list him as the basis for the character Will James, and producers "have to share the financial benefit that apparently they are going to reap from this movie," Fieger said.

"For years, Hollywood has exploited the heroics and sacrifices of veterans and in this particular case, they attempted to do it again rather grievously," he said.

A Playboy magazine article by Boal about his time with Sarver's bomb disposal unit led to the screenplay using details of Sarver's life, Fieger charged.

"Nobody can claim with a straight face that it's not Jeff Sarver," he said.

Fieger said he hopes the movie company will voluntarily acknowledge Sarver and "pay damages for the use of his life without compensation."

Sarver is still in the Army, but his location is a military secret, Fieger said.