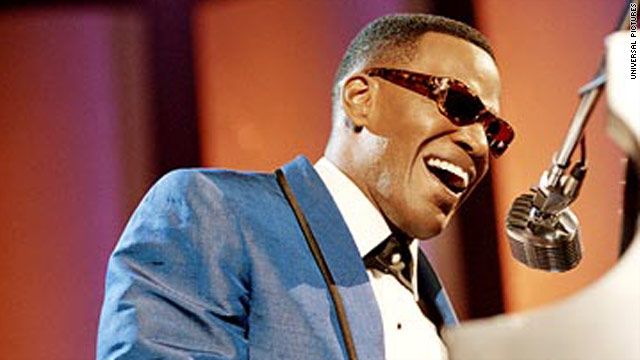 London, England (CNN) -- Whether they're overcoming odds to reach stardom, battling inner demons or dealing with tragedy, the personal histories of our musical heroes are made for the big screen.

Film biographies of musicians may be criticized for their convention, but when done right, they're movies that can affect us deeply.

The Screening Room has chosen, in no particular order, 10 of our favorite music biopics -- movies which we think tell captivating stories, but above all, bring the music of these talented artists to life.

Of course, this list isn't exhaustive: Honorable mentions go to "Control," which tells the story of Joy Division singer Ian Curtis, "Sid and Nancy," about Sex Pistols singer Sid Vicious and Oliver Stone's "The Doors." If you don't agree with this list or think we've missed one, tell us in the comments below.

1. 'Amadeus' (Milos Forman, 1984)
A sumptuous period piece that has the feel of a thriller, "Amadeus" entertains while communicating the brilliance of Mozart. We see the story through the eyes of Salieri, the bitterly jealous court composer who can't stand buffoon-like Mozart but reveres his music. F. Murray Abraham won a much-deserved Oscar for his performance as Salieri. His contempt for Tom Hulce's Mozart is visceral throughout the film.

2. 'Shine' (Scott Hicks, 1996)
Based on the life of Australian pianist David Helfgott, who made a comeback after suffering a nervous breakdown, "Shine" was a breakout film at Sundance in 1996. Geoffrey Rush went on to win an Best Actor Oscar for the role. Filled with beautiful playing (Helfgott performs on the movie soundtrack), the film is moving in its exploration of the burden of great talent and depiction of Helfgott triumphing over his painful past.

Video: Music in the movies

3. 'The Buddy Holly Story' (Steve Rash, 1978)
Gary Busey's unforgettable performance brings raw energy to "The Buddy Holly Story." He is particularly electrifying on stage, nailing country boy Holly's singing and stage style. Busey's dead-on performance, combined with classics like "Peggy Sue," "That'll Be the Day" and "Rock Around with Ollie Vee" (the movie won an Oscar for best adapted score) make it a spirited recreation of the early days of rock-and-roll.

4. 'Ray' (Taylor Hackford, 2004)
Jamie Foxx won an Academy Award for his portrayal of soul and R&B legend Ray Charles. With classics like "I Can't Stop Loving You" and "Hit the Road Jack" interwoven throughout, the film strikes an inspirational tone, showcasing the importance of Charles's music. But Taylor Hackford doesn't portray Charles as a saint, the darker side of the musician's life -- his heroin addiction and promiscuity -- is revealed and the film is all the better for it.

'Nowhere Boy'
Sam Taylor Wood's family drama about the young John Lennon and the two women fighting for his attention.

5. 'Coal Miner's Daughter' (Michael Apted, 1980)
Overcoming adversity is a common theme in biopics, and "Coal Miner's Daughter" is no exception. Oscar-winner Sissy Spacek plays Loretta Lynn, the girl from Appalachia who beat all odds, including childhood poverty and mental collapse, to become a star at the Grand Ole Opry. The plot may sound familiar, but Spacek's performance is exceptional, and the film gets to the heart of Lynn, particularly in showing her relationship with her husband, played by Tommy Lee Jones.

6. 'La Vie En Rose' (Olivier Dahan, 2007)
From her miserable childhood to her dizzying rise to fame and ensuing problems with drugs and alcohol, Marion Cotillard delivers an astounding performance as French chanteuse Edith Piaf. Piaf won over the hearts of many in France by pouring her suffering into her ballads, and the power of her songs will move most people.

7. 'Walk the Line' (James Mangold, 2005)
Different sides of Johnny Cash -- singer-songwriter, self-destructive addict, advocate for prison reform -- emerge in "Walk the Line." The film threads together different aspects of Cash's persona through his musical performances, including his legendary concert at Folsom Prison. Joaquin Phoenix and Reese Witherspoon (who took home an Oscar for this performance) have undeniable on-screen chemistry as country music's first couple and their vocal performances are superbly assured.

8. 'Bird' (Clint Eastwood, 1988)
You don't need to be a jazz lover to appreciate the beauty and sound of "Bird," Clint Eastwood's tribute to legendary jazz saxophonist, Charlie Parker. Forest Whitaker delivers a poignant performance as one of the most influential soloists in jazz. Parker's life was tinged with tragedy -- he was a drug addict and suffered his young daughter's death -- which Eastwood doesn't ignore. But, the film is more an homage to jazz and its scenes are suffused with the sound of Parker's innovative style.

9. 'Backbeat' (Iain Softley, 1994)
Iain Softley's feature stands out for its focus on the early days of The Beatles, in particular the influence of the so-called "fifth Beatle" who left the group before they made it big. "Backbeat" is pure energy, capturing the excitement of the band as they invented a whole new sound that would influence music for generations to come.

10. 'La Bamba' (Luis Valdez, 1987)
"La Bamba" tells the rags-to-riches tale of Ritchie Valens, the plantation laborer who shot to fame as a young rock-and-roll star. Valens died at the age of 17 in the same plane crash that killed Buddy Holly, but despite his tragic end, the movie doesn't strike a downbeat tone. There's a tenderness and celebration of the thrill of being young and finding that the world is open to possibilities.