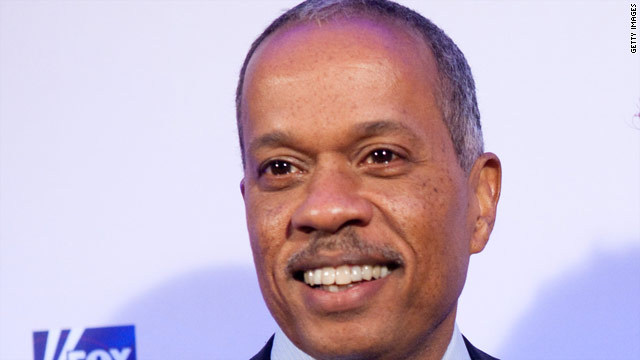 Juan Williams was fired as NPR analyst over comments made about Muslims on planes.
STORY HIGHLIGHTS
RELATED TOPICS

Atlanta, Georgia (CNN) -- NPR's president and CEO defended Thursday the network's decision to terminate the contract of Juan Williams after the news analyst made remarks elsewhere that she said veered from analysis into opinion, adding that it was not the first time.

"Juan Williams is a news analyst; he is not a commentator and he is not a columnist," Vivian Schiller said at an Atlanta Press Club luncheon. "We have relied on him over the years to give us perspective on the news, not to talk about his opinions."

Williams responded with a comment posted on FoxNews.com that called his dismissal "a chilling assault on free speech" and described the NPR leadership as "self-righteous ideological, left-wing. ... They loathe the fact that I appear on Fox News."

Williams' contract was ended Wednesday, two days after he said on Fox News' "The O'Reilly Factor" that he gets nervous when he sees people with Muslim garb on planes.

Bill O'Reilly, the Fox News personality, was seeking comment from Williams on O'Reilly's own controversial remarks made on the "The View" about Muslims.

"Look, Bill, I'm not a bigot," Williams said. "You know the kind of books I've written about the civil rights movement in this country. But when I get on a plane, I got to tell you, if I see people who are in Muslim garb and I think, you know, they are identifying themselves first and foremost as Muslims, I get worried. I get nervous."

He continued, "Now, I remember also that, when the Times Square bomber was at court, I think this was just last week, he said the war with Muslims -- America's war -- is just beginning. The first drop of blood. I don't think there's any way to get away from these facts.

"But I think there are people who want to somehow remind us all -- as President Bush did after 9/11 -- it's not a war against Islam."

Williams told O'Reilly, "You've got to be careful" to point out that there are good Muslims. He noted that Americans don't blame Christians for the actions of Timothy McVeigh in the Oklahoma City bombing.

"I gotta be careful; I have to qualify everything 50 times," O'Reilly said. "You know what, Juan? I'm not doing that anymore. I'm not doing it any more. I will say Muslim terrorists, but I'm not going to say -- oooh! -- it's only a few, it's only a tiny bit. It's not, Juan. It's whole nations -- Iran, Afghanistan, Pakistan, whole nations."

Nihad Awad, executive director of the Council on American-Islamic Relations, called Williams' remarks "irresponsible and inflammatory ... and they should not pass without action by NPR." But he told ABC News that he did not believe Williams should have been fired.

An article on NPR's website said Williams' job as an analyst on the "largely conservative and often contentious prime time talk shows of Fox News has long been a sore point with NPR News executives."

But Schiller said Thursday that "we don't necessarily have an issue" with Williams' appearances on Fox. "However, we expect anybody that appears on our air, either as a journalist or as a news analyst, to conduct themselves according to our journalistic rules of ethics -- wherever they might be, in any form and in any venue.

"There have been several instances over the years where Juan has strayed from that line and we have had discussions with him and we have asked him not to do it again. It's not the first time, quite honestly."

Schiller, a former CNN executive, did not detail any of the previous examples, but said Wednesday's remark proved fatal to Williams' NPR career. "In this case, we decided," she said, "that his integrity as a news analyst has been undermined by the fact that he has expressed these very divisive views and those two things are not compatible.

"This is not a reflection on his comments, this is not a debate. Juan feels the way he feels. That is not for me to pass judgment on. ... His feelings that he expressed on Fox News are really between him and his psychiatrist, or his publicist, or take your pick, but it is not compatible with the role of a news analyst on NPR's air."

Schiller later apologized for the reference to Williams' psychiatrist, saying in a posting on NPR's website that the remark was "thoughtless."

But Schiller said the move does not mean that NPR is averse to airing controversial opinions. "Nonsense," she said. "We have people taking controversial opinions on our air all the time. ... The difference is those words generally come out of the mouths of the people we are interviewing; they don't come out of the mouths of our reporters or our news analysts."

Asked why NPR did not take action sooner against Williams, Schiller said, "We like to give people a second chance. We're not into the gotchas. Look, it's all new territory for us in journalism. People have made mistakes and we've had journalists that have sent out an ill-advised tweet here and there. Every news organizations, all of your news organizations, have experience in this.

"We don't want to take these people out back and shoot them. We just want to say, 'Think about what you're doing. Think about this context. Let's use this,' as we say in parenting, 'as a teachable moment.' But there comes a point where it's not penetrating. And so, in this case, we decided we needed to take action."

The fact that the move against Williams -- who was working for NPR as an independent contractor -- occurred during NPR stations' pledge week did not factor into the decision, though she expressed regret that it could prove to be a "distraction," adding, "I feel badly about that."

Meanwhile, Fox News Chairman and CEO Roger Ailes announced Thursday that Williams has been signed to an expanded role with the network in a multiple-year deal.

"Juan has been a staunch defender of liberal viewpoints since his tenure began at Fox News in 1997," Ailes said in a written statement. "He's an honest man whose freedom of speech is protected by Fox News on a daily basis."

The Los Angeles Times reported that Williams got a three-year contract worth nearly $2 million that will involve more frequent appearances on the network and a column on FoxNews.com.

Williams defended his comments in a posting on FoxNews.com. "This is not a bigoted statement," he said. "It is a statement of my feelings, my fears after the terrorist attacks of 9/11 by radical Muslims."

He said he had made it clear "that all Americans have to be careful not to let fears lead to violation of anyone's constitutional rights, be it to build a mosque, carry the Quran or drive a New York cab without fear of having your throat slashed."

But, he added, "The fact is it was a group of Muslims who attacked the U.S. I added that radicalism has continued to pose a threat to the United States and much of the world. ... There is no doubt that there's a real war and people are trying to kill us."

Monday's conversation "was in the best American tradition of a fair, full-throated and honest discourse about the issues of the day. There was no bigotry, no crude provocation, no support for anti-Muslim sentiments of any kind."

He said NPR had tried years ago to stop him from appearing on "The Factor" and then insisted that he not identify himself there as an NPR journalist.

NPR then demanded he sign a new contract that removed him from his staff position but allowed him to continue working as a news analyst, he said. "The idea was that they would be insulated against anything I said or wrote outside of NPR because they could say that I was not a staff member."

He said they then began to cut his salary and his on-air role.

"And now they have used an honest statement of feeling as the basis for a charge of bigotry to create a basis for firing me. Well, now that I no longer work for NPR let me give you my opinion. This is an outrageous violation of journalistic standards and ethics by management that has no use for a diversity of opinion, ideas or a diversity of staff (I was the only black male on the air). This is evidence of one-party rule and one-sided thinking at NPR that leads to enforced ideology, speech and writing. It leads to people, especially journalists, being sent to the gulag for raising the wrong questions and displaying independence of thought."

On Thursday night, again on Fox News, he told O'Reilly about his former employer, "These people don't have any sense of righteousness -- what's right here. They're self-righteous."

"I don't fit in their box," he said. "They were looking for a reason to get rid of me because I appear on Fox News. They don't want me talking to you."

Former Arkansas Gov. Mike Huckabee, who also is a Fox contributor, called on the next Congress to cut the radio network's funding when it convenes next year.

"NPR has discredited itself as a forum for free speech and a protection of the First Amendment rights of all and has solidified itself as the purveyor of politically correct pabulum and protector of views that lean left," Huckabee said in a statement provided to CNN.

"It is time for the taxpayers to start making cuts to federal spending, and I encourage the new Congress to start with NPR," he said.

Schiller said federal funding makes up only 1 percent to 2 percent of its budget, with most of its financial support coming from station fees, sponsorships and grants.

He worked for 21 years at The Washington Post and hosted a national call-in show with NPR for a year along with being a news analyst for the radio network, according to his biography on NPR's website, which had disappeared by Thursday afternoon.