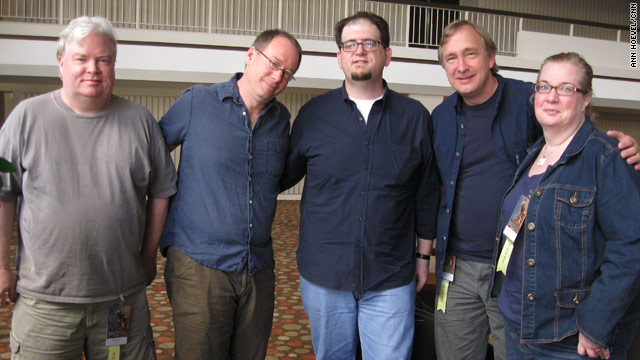 Atlanta, Georgia (CNN) -- In the late 1980s through the end of the 1990s, an unusual show on Comedy Central (once called the Comedy Channel) cultivated a devoted audience that loved bad B-grade movies and inspired heckling. "Mystery Science Theater 3000" showed series creator Joel Hodgson as a man stranded in space with some wisecracking robots. As original cast members left the show and new comedians were introduced, the show continued to deliver a unique brand of humor.

CNN: What's it like being back with some of the old "MST3K" gang?

Hodgson: It's been great. We're kind of like different gangs all intersected because our times at "Mystery Science Theater" didn't all overlap. But we all knew each other before "Mystery Science Theater" even started, because we were all comics. So it's been great. It's been fun to hang out with these guys after so many years. We hang out a lot now because we're on the road together quite a bit.

Weinstein: This is like our third year doing this, so we've had a lot of experience. We've done 60 shows on the road these last three years, and each time we go to a new location, so we're spending a lot of time with each other now. Or, just enough time.

CNN: Can you explain the process of finding the movies that you're going to give the Cinematic Titanic treatment to?

Hodgson: I do it now. Frank did it for "Mystery Science Theater," so he can give you his take on it for that. For Cinematic Titanic we use certain vendors who search for movies, so occasionally they'll bring stuff to me. Or I'll just look for stuff. Half of our stuff is licensed, so they're representing different producers, and half of it is public domain, so that's a whole different process. You find a movie, and you have to find the right print and you have to do a copyright search, talk to the lawyer, make sure it's OK to use.

Then, once we have those that fit that profile, then I show it to everybody and we go through the process of everyone signing off on it, saying if this will work. We just did that with a new movie we're working on right now. It's called "Watch Out for Snakes."

Pehl: People get ravaged. Is that a bad way to use that word?

Conniff: For "Mystery Science Theater" it was a little different, in that we would be sent a bunch of screeners. When we were working with Comedy Central they would find screeners and send them to us, and I would just do the initial process of going through the boxes and watching them, find the ones I thought could work as a show, and then show them to everybody else. But back then we had the machinery of a cable network to help us with that kind of stuff, but now we're on our own.

CNN: How is Cinematic Titanic distributed? What's working, what's not and what are your future plans?

Weinstein: We're self-financed and self-distributing. Trace and his wife do fulfillment stuff. We also offer the show through download at a site called easytakes.com. And it seems like it's about half and half.

Beaulieu: Yeah, it runs, hard disks maybe twice as much as downloads.

Hodgson: Plus easytakes is packaging our movies as apps for the Droid so you can buy the app and it will just play the movie.

Weinstein: The Droid thing has yet to launch.

Beaulieu: We sell a good number of DVDs here [at Dragon*Con] and at our live shows, too. It's a real manufacturing to customer direct line.

Conniff: We leave out the middle man and pass the savings on to you!

Hodgson: He's waited his whole life to say that.

CNN: Do you find that audiences at Dragon*Con are especially tuned in to your brand of humor? What is the con circuit like for you?

Hodgson: Well we don't really do the circuit, we sort of just go to the occasional con.

Beaulieu: This is the one we've been to the most. This is our third year. This one fits our sensibility more because our MO has always been do-it-yourself, and this one is all that. It's really people-powered. Comic-Con is really just Hollywood blowing you away with how much money it has and awing you with its giant displays and you really are, as a fan or an observer, you're really put in this category. Here it really just, like, flows everywhere. You just can see people being creative and kind of doing their own thing. I think this one fits much better, I prefer this con way more than Comic-Con.

Weinstein: We did the Cinematic Titanic panel last night to a packed ballroom and then we showed our episode and then came back afterwards and did some signing afterwards. But 90 percent of that audience stayed to watch the episode.

Beaulieu: Yeah and they were a great audience for that episode.

Weinstein: Yes, they were totally tuned in and it was exciting to see.

CNN: Josh, how did you decide on the moniker J. Elvis?

Weinstein: I decided on it because when I joined the writer's guild there already was a Josh Weinstein, and I gave myself the Elvis because I loved that it gave me the initials J. E. W. and also somewhat inspired by being a fan of Elvis Costello, but mostly it's about J. E. W.

Hodgson: In LA there are very few people not named Josh Weinstein.

CNN: Can you describe the transition from "Mystery Science Theater" to what you're doing with Cinematic Titanic and what your old coworkers are doing with RiffTrax?

Hodgson: Well, when we started we were really interested in doing very quirky movies, and [RiffTrax] were doing big movies. They did "Lord of the Rings," and any big blockbuster that came out. It seemed really clear that we're working this side of the street with old movies and they're working new movies. But that's getting kind of muddled now because they're coming back and doing old movies. Like we did in "Mystery Science Theater."

CNN: What's the secret to making wisecracks for a living?

Conniff: That's a long process. We all started out as stand-up comics, so we all set out for careers being weisenheimers, making wisecracks.

Beaulieu: You have Weisenheimers, don't you? [Everyone laughs.]

Conniff: I do, actually, it's painful.

Pehl: We're having a walk for you.

Weinstein: But we were lucky enough, when we started "Mystery Science Theater" to have a UHF station that sort of gave us free reign. So we had a little laboratory to create this art form, if you will.

Hodgson: Back then we did 20 shows, and we just improvised. It was unheard of back then to make a show where you just kind of talk over a movie. Prior to that there had been people who re-synched, added sound, redone the dialogue on movies, but this was really different so it grew very organically. By the end of it we kind of had it figured out. If we didn't have that, I can't imagine just walking in and trying to pitch this idea to anybody.

Hodgson: We had a thousand people in a fan club, so we had this kind of packet that we could lay down when we went to the Comedy Channel. And we said, "Hey, this is happening," and they just happened to need content. So it was just 'cause it was the beginning of basic cable and they needed to fill time more than anything.

Hodgson: It worked for us.

CNN: What's the difference between a geek and a nerd?

Weinstein: Geeks will talk to us, nerds find us too weird.

Conniff: I think a nerd gets beat up, and a geek gets beat up and then goes and watches an episode of "Buffy the Vampire Slayer."