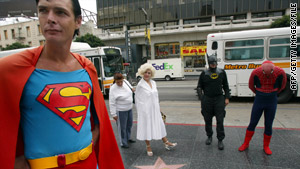 It's part of a police crackdown on unlicensed costumed characters who pose for photos with tourists near Grauman's Chinese Theatre while hoping for -- but not demanding -- small tips.

"It's un-American," said Joe McQueen, an actor who has made his living for the past 10 years wearing an Incredible Hulk costume. "I feel like we're being bullied, dude."

Hollywood Boulevard was clear of the characters but filled with tourists Thursday. Actors usually in costume wore street clothes fearing police would arrest them otherwise.

"Tourists are going 'Where are all the characters?' " said Christopher Dennis, a mild-mannered actor who has portrayed Superman for 19 years.

Like Superman, Dennis is seen as a powerful figure because he has a level of fame. He was featured in "Confessions of a Superhero," a 2007 documentary about the lives and dreams of these street performers.

When Dennis donned his tights and cape for short visit to the boulevard Thursday afternoon, he was the only character there. Tourists from around the world, including France, Germany and South Korea, swarmed around him for photos.

Dennis was emboldened by TV cameras following him, knowing if police did arrest him at least the world would see.

Los Angeles police did not respond to several requests for an interview about the crackdown.

The Scissorhands character was let go, but at least eight others were hauled off to the Hollywood jail on loitering charges.

Struggling actors survive on the tips while pursuing their dreams of stardom.

Their numbers have grown in recent months along with the complaints that some were strong-arming tourists for tips.

"I thought I'd just dance and have fun, just enjoy myself," the 25-year-old Missouri native said. "I wasn't asking for tips."

Police told Schonberner, who has been performing on the sidewalk for two years, they've gotten "multiple complaints against you from businesses and the security," he said.

He denied breaking the law against pressuring tourists for money.

"I tell them 'Just to let you know, tips are greatly appreciated,' " he said. "Half the time I don't even ask for a tip."

Schonbrener was freed from jail the next morning with a court date and a warning.

"They said 'You'd better not go back out or you will be arrested and held,' " Schonbrener said.

At least nine others were arrested over the next several days, including Scooby Doo, a Johnny Depp lookalike, an Elvis and another Cat Woman, Dennis said. They were all charged with loitering, he said.

The Incredible Hulk impersonator Joe McQueen, who starred in the "Confessions" film with Dennis, was there Monday when police rounded up several characters for arrest. Although he was detained, they later released McQueen without a charge, he said.

"I didn't break no law," McQueen said. "As far as a loitering charge is concerned, this is a public street. That's un-American."

When police let him go, it was with a warning.

"They told me 'Let everybody else know from here on out that if we catch anybody out here in a costume, we're going to arrest you,'" McQueen said.

Batman impersonator Tony Tomey was not bowed. He showed up Wednesday afternoon "to make a statement so people can see that this is unfair," McQueen said.

Within minutes, an LAPD squad car pulled up in front of the Madame Tussauds Wax Museum, and Tomey was handcuffed and taken to jail. He was still locked up Thursday afternoon, according to LAPD records.

The Superman and Incredible Hulk imitators both said street cops have told them the crackdown was ordered "from upstairs."

"They wouldn't tell me who the people upstairs are," McQueen said. "I'm not going to give up until we finally figure out who the powers are that put the orders down, and I have some type of reason."

Some of the actors are talking about organizing a protest, he said.

"It's sad to see how this is happening right now, because this is our best time of the year," he said.