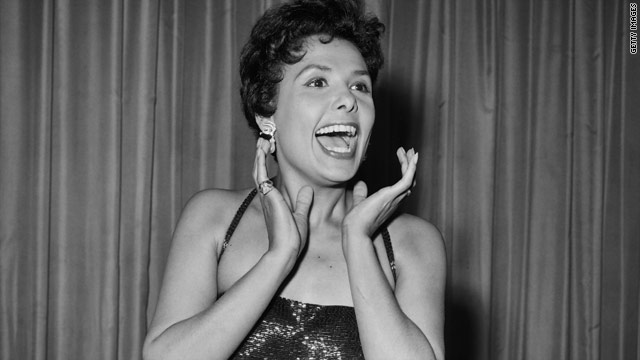 No other details of her death were made public.

Horne was the first African-Americans to sign a long-term movie contract with a major Hollywood studio when she joined MGM in 1942.

Horne's expressive and silky voice made her a singing star, known best for her hit "Stormy Weather," after Hollywood failed to give her roles that might have made her a big screen starlet.

Horne complained she was used as "window dressing" in white films, mostly limited to singing performances that could be easily edited out for play in southern theaters.

The light-complexioned Horne refused to go along with studio plans to promote her as a Latin American.

She later said she did not want to be "an imitation of a white woman."

Horne, whose parents divorced when she was 3, lived a nomadic childhood traveling with her actress mother. She spent much of her time growing up in Brooklyn, New York, where she was born in 1917.

Horne was 16 when she began her show business career as a dancer at Harlem's Cotton Club. She later became a singer there, playing to packed houses of white patrons, with band leaders Cab Calloway and Duke Ellington.

She began taking singing lessons in 1935, and eventually landed a part in the all-black Broadway production "Dance With Your Gods."

Her work as a feature singer with touring bands and in nightclubs increased. She became the first African-American singer to tour with a white group in 1940, according to her official biography.

Her first film role came in 1938 in "The Duke is Tops," but her next movie didn't come along for another four years.

She was given a screen test by MGM and signed to a seven-year movie contract after a studio scout saw her performing in a New York club.

Her stepfather, Miguel Rodriguez, negotiated with MGM head Louis B. Mayer for her to never be cast as a maid or "Tarzan extra."

"I think the black boy that cleaned the shoes and me were the only two black people except the maids who were there working for the stars," Horne said in a CNN interview. "And it was very lonely and I wasn't very happy."

Still, Horne said she was grateful that her World War II era films -- including black musicals "Cabin in the Sky" and "Stormy Weather" -- were seen by black and white soldiers.

"But after I realized I would only go so far, I went on the stage," Horne said.

With only subservient roles available for a black actress in Hollywood in the 1940s, Horne turned to recording top-selling songs.

Horne said performing for live audiences was what she loved most.

"I'm always happy when I'm surrounded by people to react and feel and touch," she said.

While traveling with a USO tour during the World War II, she walked out on a show because German war prisoners were seated in front seats, ahead of African-American troops. After the USO withdrew her from the tour, she used her own money to travel to sing for the troops.

She has a son and daughter from a first marriage that ended in 1944.

Horne married again in 1947 to Lennie Hayton, who was then MGM's music director. She kept the marriage secret for several years, since Hayton was white. When it was made public, the couple received hate mail and threats of violence, according to her biography.

Radio, television, film and nightclub jobs were harder for Horne to find in the McCarthy era of the 1950s when she was blacklisted. That ended in 1956 when RCA gave Horne a new recording contract and she earned a guest spot in the movie "Meet Me in Las Vegas."

Horne returned to Broadway in 1957 for her first starring role there. "Jamaica" ran for 555 shows.

She became active in the civil rights movement after she was involved in a public altercation following a racial slur in a Beverly Hills, California, restaurant in 1960.

She was an active supporter of the Rev. Dr. Martin Luther King Jr.'s civil rights movement. Horne was there when King delivered his "I Have a Dream" speech on the Lincoln Memorial steps in 1963.

Variety television shows welcomed Horne as a musical performer, especially in the 1960s. She appeared on numerous episodes with Perry Como, Dean Martin and Flip Wilson.

She returned to film for a final role in 1978 as Glinda the Good Witch, opposite Michael Jackson and Diana Ross, in "The Wiz," an adaptation of "The Wizard of Oz."

She got a special Tony Award for her 1981 one-woman Broadway hit "Lena Horne: The Lady and Her Music." She also won two Grammys for the recording of the show.

Horne was honored with a Grammy Lifetime Achievement Award in 1989, and she also won a Grammy in 1995 for best jazz vocal performance for her album "An Evening With Lena Horne."

In her later years, Horne said she found peace.

"The best time in my life I guess is now because I'm quiet and I'm logical and I accept without flying off the handle -- sometimes I do," Horne said with a laugh.