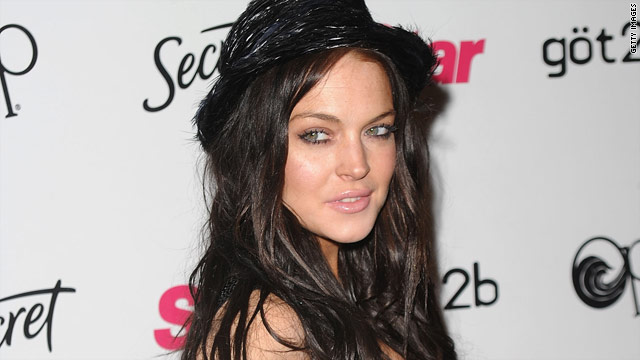 Los Angeles, California (CNN) -- Lindsay Lohan's battle with her father took another turn this week when Michael Lohan persuaded a sheriff's deputy to help him enter her Hollywood home to check on the welfare of her 16-year-old sister.

"I have no choice but to make this public, due to my sister's safety, as well as my own," the singer-actress said in a Twitter posting Thursday afternoon. "'My ex-dad' just WALKED INTO MY APT like the devil's advocate with officers."

"When will it ever end," she tweeted. "It's been going on my whole life with him -- hasn't he caused enough pain?"

Lindsay Lohan's lawyer said it was "nothing more than a publicity stunt."

After the surprise visit to his daughter's home, Michael Lohan then drove to TMZ's Hollywood newsroom, where he appeared in a live webcast to talk about why he did it.

He said he flew to Los Angeles when a friend told him his 16-year-old daughter, Ali, was partying with her older sister. The friend also said he saw them driving 115 mph on a freeway, he said.

"That was the straw that broke the camel's back," Lohan told TMZ's Harvey Levin.

He said he talked with Los Angeles narcotics detectives Thursday morning to ask for their help.

"The same thing happened with Lindsay when she was 16 years old," he said. Lindsay Lohan, now 23, was allowed to live in Los Angeles as a teenager "with no real guardian," he said.

His oldest daughter was apparently watching the TMZ webcast, because she quickly responded with a series of Twitter messages.

"As for the ridiculous TMZ bs 'concerned' father interview, I must correct Michael Lohan when I say that Aliana IS watched ... by a guardian AT ALL TIMES," Lindsay Lohan tweeted.

She said the guardian watching Ali "is very close to my family and is a POSITIVE influence in my life."

Lindsay Lohan told the British newspaper The Sun earlier this year that she feared for her life while abusing substances to deal with family problems in 2007. She said she has since learned to embrace life instead of drugs.

Lohan was arrested twice in 2007 on charges of driving under the influence, and in the second incident also was charged with cocaine possession. She is on probation for a 2007 drunken driving conviction and is participating in a required alcohol counseling program.

Since then, she has starred in at least a dozen movies, including "Georgia Rule" with Jane Fonda in 2007. Her pop music recording career, boosted by her movie roles, has faded recently. Her last album was released in 2005.