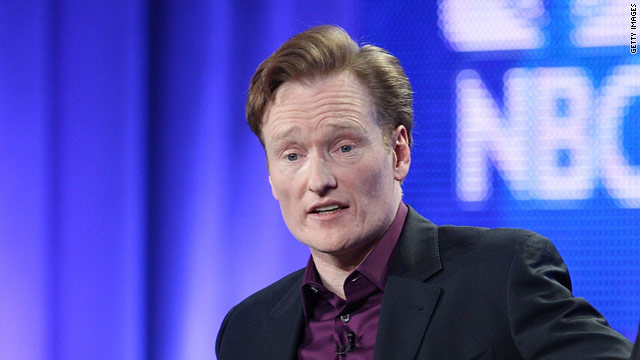 Conan O'Brien, who left the "Tonight Show" on Friday, says he remains optimistic about his future.
STORY HIGHLIGHTS
RELATED TOPICS

(PEOPLE.com) -- After an ugly shakeup at NBC over the late-night lineup, Conan O'Brien hosted the "Tonight Show" for the last time Friday.

"We've a had a lot of fun being here these last seven months, but like everything in life, the fun has to come to an end a decade too early," the comedian joked during his opening monologue. "As I set off for exciting new career opportunities, I just want to make one thing clear to everyone listening out there: I will do nudity."

The red-headed host is getting $45 million to leave his late-night hosting gig on NBC so that Jay Leno can return to the 11:35 p.m. slot from prime time, where his ratings had been sagging.

As for how history will remember the late-night showdown, O'Brien has at least one idea. "HBO, when you make the movie about this whole NBC late night fiasco, I'd like to be played by Academy-Award winning actress Tilda Swinton," he cracked.

Leno's new "Tonight Show" will premiere March 1, followed by "Late Night with Jimmy Fallon" at 12:35 a.m. O'Brien is free to sign a contract with another network beginning on September. 1, NBC said.

Although his opening monologue was light, before wrapping up the show by singing a song with guest Will Ferrell, O'Brien expressed his heartfelt gratitude to his fans and took the high road, thanking NBC for all the years he spent at the company.

"There has been a lot of speculation in the press about what I legally can and can't say about NBC. To set the record straight, tonight I am allowed to say anything I want. And what I want to say is this: between my time at "Saturday Night Live," "The Late Night Show," and my brief run here on the "Tonight Show," I have worked with NBC for over 20 years. Yes, we have our differences right now and yes, we're going to go our separate ways, but this company has been my home for most of my adult life. I am enormously proud of the work we have done together, and I want to thank NBC for making it all possible.

"Walking away from the "Tonight Show" is the hardest thing I have ever had to do. Making this choice has been enormously difficult," O'Brien continued. "This is the best job in the world, I absolutely love doing it, and I have the best staff and crew in the history of the medium. But despite this sense of loss, I really feel this should be a happy moment. Every comedian dreams of hosting the "Tonight Show" and, for seven months, I got to. I did it my way, with people I love, and I do not regret a second. I've had more good fortune than anyone I know and if our next gig is doing a show in a 7-11 parking lot, we'll find a way to make it fun.

"Finally, I have to say something to our fans. The massive outpouring of support and passion from so many people has been overwhelming. The rallies, the signs, all the goofy, outrageous creativity on the Internet, and the fact that people have traveled long distances and camped out all night in the pouring rain to be in our audience, made a sad situation joyous and inspirational. To all the people watching, I can never thank you enough for your kindness to me and I'll think about it for the rest of my life. "

Although O'Brien did not end up winning the late-night battle, he remains optimistic about his future, he said, and hopes his fans do the same.

"All I ask of you is one thing: please don't be cynical. I hate cynicism -- it's my least favorite quality and it doesn't lead anywhere," he concluded. "Nobody in life gets exactly what they thought they were going to get. But if you work really hard and you're kind, amazing things will happen.