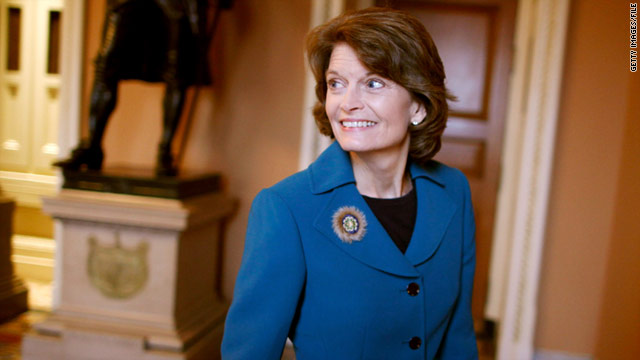 The way has been cleared for Lisa Murkowski to be sworn in on time for the new congressional session that starts next week.
STORY HIGHLIGHTS
RELATED TOPICS

(CNN) -- Alaska's top two elected officials on Thursday certified Sen. Lisa Murkowski's re-election in November as a write-in candidate, clearing the way for Murkowski to be sworn in on time for the new congressional session that starts next week.

Gov. Sean Parnell and Lt. Gov. Mead Treadwell signed the paperwork certifying Murkowski as the election winner, according to a statement by the governor's office.

The papers now will be hand delivered to the secretary of the Senate in Washington before noon Monday, the deadline for Murkowski to be able to get sworn in when the Senate convenes again on January 5, the statement said.

Murkowski is the first senator to win election in a write-in campaign since Strom Thurmond did it in South Carolina in 1954, and her victory followed a lengthy legal battle over the way the votes were counted.

She was defeated in the Republican primary in August by Joe Miller, a Tea Party-backed candidate. Murkowski then waged the write-in campaign in the general election in November to defeat Miller, who filed a lawsuit challenging the result.

On Tuesday, a federal judge dismissed Miller's lawsuit, clearing the way for final certification of the vote.

Miller said he was disappointed with the ruling, adding that he still believed his challenge was on solid constitutional ground.

"Thus, we are evaluating the ruling and determining what our next step should be," Miller said Tuesday.

After the November 2 election, Miller filed a challenge against the Division of Elections to ensure adherence to state law, which calls for write-in votes to match the name of the candidate. Miller argued that Alaska law does not allow the counting of misspelled names on write-in ballots.

Earlier this month, the Alaska Supreme Court ruled that the Alaska Division of Elections conducted the election according to state law.

The final certified vote count had Murkowski ahead by 10,252.