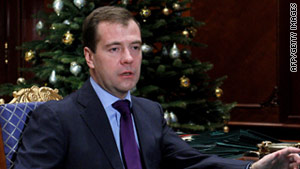 According to a White House statement, the two presidents spoke by phone on the first day of Obama's Hawaiian holiday after Congress adjourned Wednesday in a flurry of legislative action, including the Senate vote to pass the treaty -- a major foreign policy objective of the Obama administration.

"President Obama and President Medvedev spoke by phone this morning to discuss the new START Treaty and their continued close cooperation on a range of critical issues," the White House statement said. "President Medvedev congratulated President Obama on the Senate's approval of the new START Treaty, and the two leaders agreed that this was an historic event for both countries and for U.S.-Russia relations."

Obama cited issues of cooperation with Russia including Afghanistan, sanctions on Iran and World Trade Organization developments, the statement said. Obama added it was important for the two countries to work together "to support a peaceful referendum in Sudan and a resolution to the impasse in Cote D'Ivoire (Ivory Coast) that respects the results of the recent democratic election," according to the statement.

The New Strategic Arms Reduction Treaty, or New START, was passed on a 71-26 Senate vote, with several Republicans joining a unified Democratic caucus in support of the accord.

The treaty will bring resumed inspections of each country's nuclear arsenal while limiting both the United States and Russia to 1,550 warheads and 700 launchers. It still needs to be approved by the Russian parliament.

Signed by Obama and Medvedev in April, the treaty is considered a critical component of nuclear non-proliferation efforts and the administration's attempt to "reset" Washington's relationship with Moscow.

"This is the most significant arms control agreement in nearly two decades," Obama said Wednesday after the Senate vote. It "will enhance our leadership to stop the spread of nuclear weapons and seek the peace of a world without them."

McCain himself, despite passage of the amendment he sponsored, ultimately voted against the accord. He argued that it "re-establishes an old and outdated linkage between nuclear arms and missile defense, which is no longer suited to the threats of today's world."