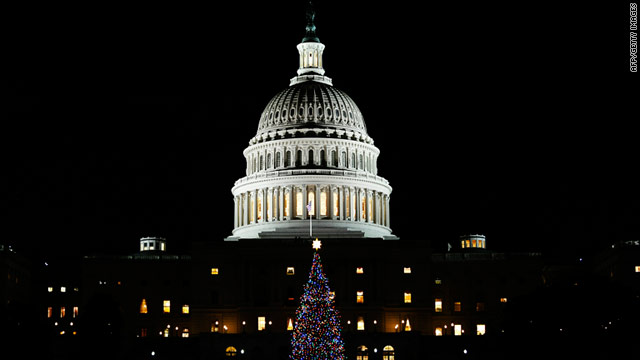 Conservatives oppose the spending bill and threaten to obstruct its progress by having it read out loud in the Senate chamber.
STORY HIGHLIGHTS

Washington (CNN) -- With time running out on the government's authority to spend money, the Senate is expected to vote this week on a $1.1 trillion bill that would settle the issue for the rest of the fiscal year.

However, conservative Republicans oppose the plan and threaten to obstruct its progress by having it read out loud in the Senate chamber, which could take more than two days.

The House has already passed its version of the legislation in the form of a $1.08 trillion resolution that sets spending at the same level as last year.

Such spending authorization is necessary to keep the government running, and the current resolution expires on December 18. Both chambers will have to approve a common approach to prevent the government from shutting down after that.

However, deep divisions between Democrats and Republicans on policy means the size and shape of the measure remains uncertain.

The spending bill proposed in the Senate combines all of the various appropriations bills in a package that includes an estimated $8 billion in specific provisions, added by legislators, called earmarks.

While the total amount of earmarks is a tiny percentage of the overall bill, many Republicans and some Democrats have pledged to oppose all earmarks as a way to control spending.

Republican Sen. Jim DeMint of South Carolina, who has become a leading voice of the Tea Party movement, said he and other conservatives would force the nearly 2,000-page Senate measure to be read out loud before it can be debated in order to ensure that everyone knows all the provisions it contains.

On Tuesday, Republican Sen. John McCain of Arizona also criticized the proposal and called instead for a short-term measure that would keep the government operating into next year, when a new Congress elected in November can decide on spending through the end of fiscal 2011.

Democrats want to pass their own spending proposal for the rest of the fiscal year during the current lame-duck session because the new Congress that convenes in January has Republicans controlling the House and comprising a larger minority in the Senate.

The Senate plan put together by its Appropriations Committee would authorize just under $1.1 trillion in spending, $29 billion below the amount sought by President Barack Obama for fiscal year 2011, according to a committee statement.

Democratic Sen. Daniel Inouye of Hawaii, the committee chairman, called the spending proposal a better alternative than the House resolution, which maintains current spending levels instead of adjusting to changing needs.

"I do not believe that putting the government on autopilot for a full year is in the best interest of the American people," Inouye said in the statement, adding that his committee's plan had bipartisan input and support.

Obama had requested almost $1.14 trillion in spending for the 2011 fiscal year, which began October 1, 2010. The House resolution, at $1.089 trillion is $45.9 billion less, according to a statement by retiring Rep. David Obey, D-Wisconsin, the chairman of the House Appropriations Committee.