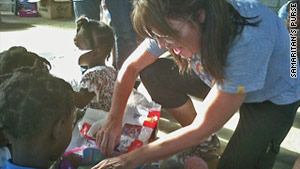 Sarah Palin visits with children after her arrival Saturday in Haiti.
STORY HIGHLIGHTS

Are you in Haiti? Share your Palin images and cholera updates with CNN iReport.

"I am pleased that Gov. Palin will accompany us on a brief trip to Haiti this weekend, and I appreciate her willingness to visit Haiti during such troubled times," Graham said in a statement on the organization's website.

"I believe Gov. Palin will be a great encouragement to the people of Haiti and to the organizations, both government and private, working so hard to provide desperately needed relief."

Palin -- the Republican vice-presidential candidate in the 2008 election -- has not commented on the widely reported trip. Many observers believe she is considering a run for president in 2012.

The visit comes as Haiti is fighting a massive cholera outbreak that has killed more than 2,000 people and sickened nearly 100,000.

The country has been struggling to recover from January's massive earthquake that left more than 220,000 dead.

A disputed presidential election has threatened to plunge the country into further chaos.

Graham's delegation is expected to stop at a cholera clinic where they will deliver holiday gifts to children under Samaritan Purse's Operation Christmas Child.