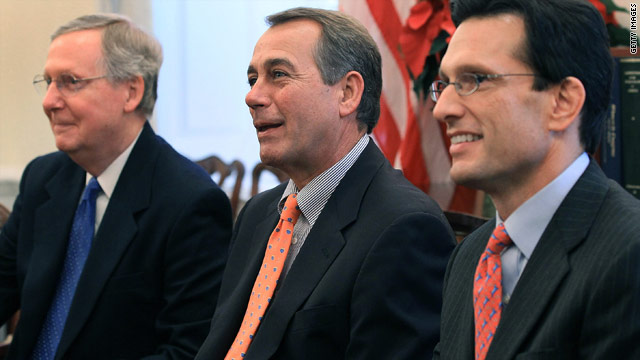 Senate Minority Leader Mitch McConnell, from left, and Reps. John Boehner and Eric Cantor are among the leaders of the GOP.
STORY HIGHLIGHTS

(CNN) -- In the months leading up to the midterms, President Barack Obama and Democrats tried to label Republicans the "party of no."

But in the weeks since the election, Republicans have come out of the gate swinging, prompting the president to peg them as the "hostage takers."

And with liberal Democrats in the House revolting over the deal Obama worked out with Republican leaders to extend tax cuts to all Americans rather than just those making $250,000 or less -- a key campaign promise -- the president is in a tight spot. He'll face a larger class of Republicans coming in with the new Congress next month and Democrats remaining defiant despite their weakened standing.

All 42 Senate Republicans last week issued an ultimatum, refusing to move ahead with any other issues being considered by the lame-duck Congress until the dispute over extending the tax cuts, which are scheduled to expire at the end of the year, was resolved and an extension of current government funding was approved.

It was a bold move by Republicans, who won control of the House of Representatives in last month's midterms and weakened Democrats' power in the Senate. Supporters said Republicans were standing up for their principles, while Democrats likened it to a congressional temper tantrum.

"Mitch McConnell and the Republican senators that signed that letter last week said basically, 'You are going to play by our rules or we're going to take our ball and go home,' " said Democratic consultant Mo Elleithee.

So far, the White House has been forced to play by GOP rules.

With Congress at a stalemate, Obama this week announced a deal worked out with Republican leaders that recommended extending the tax cuts for all income levels for two more years.

"The president saw the ticking clock running down and knew that he had to get something passed to protect the middle class and unemployed people, and this was the best that we could get," Elleithee said.

Obama: Tax debate on the way

But House Democrats don't see it that way, voting Thursday not to bring up the tax package in its current form.

"This message today is very simple. That in the form that it was negotiated, it is not acceptable to the House Democratic caucus. It's as simple as that," said top Democratic Rep. Chris Van Hollen of Maryland.

"We will continue to try and work with the White House and our Republican colleagues to try and make sure we do something right for the economy and right for jobs, and a balanced package as we go forward."

The vote came a day after Vice President Joe Biden behind closed doors made it clear to House Democrats that if any changes were made, the deal would unravel.

Democratic pollster John Anzalone said the missing part of the story is what Obama got from Republicans.

"Obama did a really good job of brokering a deal that provided a lot of relief for middle-class America that above and beyond has anything to do with the Bush tax cuts," Anzalone said.

In a concession to Democrats, for example, Republican negotiators agreed to leave in place for 13 months the option to file for extended federal unemployment benefits.

"Good presidents are good vote-counters. The reality is that we just saw in the U.S. Senate that we couldn't get 60 votes, so what the hell was the president supposed to do? Just ignore that for the sake of fighting?" Anzalone added.

Still, Democrats have been fuming all week.

I disagree that we didn't get anything -- we got screwed.
--Democratic Rep. Gary Ackerman
RELATED TOPICS

"I disagree that we didn't get anything -- we got screwed," said Rep. Gary Ackerman, a New York Democrat.

But GOP strategist Ron Bonjean said Republicans didn't need to do much compromising to reach a deal with the president.

"When the president has a huge loss in his party, he has to show Americans that he gets it -- that they lost because they weren't listening," he said.

After his party lost control of Congress in the 1994 midterm elections on the heels of an unsuccessful effort to overhaul health care, President Clinton moved toward the center. He declared in his 1996 State of the Union address, "The era of big government is over."

Bonjean said Obama's problem is that he's "begrudgingly" showing he is listening to the American people while still trying to satisfy everyone.

Republican strategist David Winston said the unresolved question is -- Can Obama do what Clinton did and "recognize what the election meant"?

"It looks like potentially he could pivot ... but he's obviously getting resistance within his own party," said Winston, who worked for then-House Speaker Newt Gingrich during Clinton's second term.

Despite outrage from Democrats, a Gallup Poll released Wednesday indicates that two-thirds of Americans support the tax deal. A Bloomberg National Poll out the same day suggests that just more than a third of Americans support keeping the lower tax rates for the highest earners in the country.

Obama said his deal with Republicans was a "good agreement" and urged Democrats to "make sure that we understand this is a long game. This is not a short game."

"I've said before that I felt that the middle-class tax cuts were being held hostage to the high-end tax cuts. I think it's tempting not to negotiate with hostage takers, unless the hostage gets harmed. Then, people will question the wisdom of that strategy," the president said. "In this case, the hostage was the American people. And I was not willing to see them get harmed."

It was hardly a warm embrace of the GOP, but a recognition of reality. Next month, Congress will have a much more conservative face. Republicans in the midterms picked up 63 seats in the House, giving them the majority, and in the Senate, they cut into the Democrats' majority with a gain of six seats.

Had Obama not tried to get the tax cut issue off the table, Republicans, with their strengthened numbers, could have pushed it through in January and claimed a campaign win early on in the year, Bonjean noted.

Republicans, however, are also aware that the midterms weren't necessarily an endorsement of their agenda. A CNN poll released last month found that one in six say the election results were a mandate for the GOP.

CNN poll: Election not a mandate for GOP

Before the election, Republicans unveiled a "Pledge to America" outlining their governing agenda. The pledge focused primarily on jobs and the economy, including a proposal to extend all the tax cuts permanently.

Bonjean said the latest tax deal shows Republicans are trying to keep their campaign promises about lowering taxes, but Elleithee said the GOP is taking the wrong approach.

"There's a fine line between confidence and cockiness. And I think they are falling on the wrong side of that line," he said.

"They're looking like a bunch of spoiled brats who refuse to work in good faith with the other side."

While bipartisan legislation looks good politically, the American people just want the economy to improve -- no matter which party gets credit.

"Ultimately people want to know that the problems are getting solved," Winston said.

With the new Congress weeks away from being sworn in, congressional leaders are meeting with their staffs and drawing up their road maps for the year ahead.

Bonjean said to expect an onslaught of bipartisan speeches in the first quarter of the year -- and then after the dust settles, it will be clear whether Congress is headed toward gridlock or growth.

"We'll have to see when the rubber meets the road, will both parties be able to work together to pass initiatives or will this be a messaging war ... on priorities?"