U.S. officials deny they are urging technical takedown of WikiLeaks 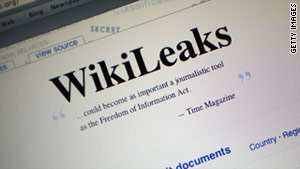 Washington (CNN) -- U.S. officials at the Pentagon and State Department denied Friday knowing of any efforts to take down the WikiLeaks website or asking companies to do so.

The site's efforts to publish 250,000 diplomatic cables has been hampered by denial-of-service attacks, ejection from its server host and cancellation of its name by its American domain name provider. Each time WikiLeaks has worked out other arrangements to bring the site back online.

In written answers to readers' questions posted on the website of the British newspaper The Guardian, WikiLeaks' founder Julian Assange alleged "abusive elements of the United States government" were behind the site's technical problems.

A State Department spokesman disputed that the U.S. government was involved.

A look inside the 'Wiki-Cave'

"I am not aware of any conversations by the United States government with either any internet host here or any government over there at this point," said spokesman P.J. Crowley.

Lapan said the military's Cyber Command has both defensive and offensive capabilities but is limited where and how it can operate.

"Cyber Command is to protect DoD networks," Lapan said at an off-camera question session with journalists. "There are other agencies of the U.S. government that get involved in the commercial side. So there are certainly legal and other boundaries that would have to be considered."

The Pentagon's top spokesman, Geoff Morrell, said earlier this week that Secretary of Defense Robert Gates does not want to use the Pentagon's online resources to go after WikiLeaks because the impact of the documents being published is not severe enough to warrant it.

The United States is trying to track where WikiLeaks is publishing from, Crowley said.