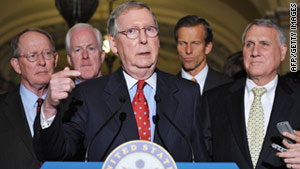 Washington (CNN) -- Senate Republicans promised Wednesday to block legislative action on every issue being considered by the lame-duck Congress until the dispute over extending the Bush-era tax cuts is resolved and an extension of current government funding is approved.

All 42 Senate Republicans signed a letter to Senate Majority Leader Harry Reid, D-Nevada, vowing to prevent a vote on "any legislative item until the Senate has acted to fund the government and we have prevented the tax increase that is currently awaiting all American taxpayers."

"With little time left in this congressional session, legislative scheduling should be focused on these critical priorities. While there are other items that might ultimately be worthy of the Senate's attention, we cannot agree to prioritize any matters above the critical issues of funding the government and preventing a job-killing tax hike," the letter said.

The 2001 and 2003 tax cuts enacted by former President George W. Bush will expire after December 31 if Congress fails to reach an agreement on their extension. Top Democrats and Republicans disagree sharply over whether the current tax rates should be extended just for families earning $250,000 or under per year or for everyone regardless of income.

The real cost of tax cuts

'We can't afford tax cuts for the rich'

Republicans contend that a failure to extend all of the tax cuts would hamper an already-sluggish economy. President Barack Obama and Democratic congressional leaders argue that the roughly $700 billion price tag attached to an extension of the tax cuts for the wealthiest Americans would be fiscally irresponsible.

White House and congressional tax negotiators began deliberations Wednesday morning. Treasury Secretary Tim Geithner characterized the initial talks as "very civil" and said that while everything was discussed, there were no surprises.

House Democrats, meanwhile, announced their intention to move forward with a vote Thursday to permanently extend the breaks only for families earning $250,000 or less.

House Minority Whip Eric Cantor, R-Virginia, called it a "non-starter" and "political chicanery" that threatened to undermine the talks.

On the spending side, a continuing resolution responsible for funding the government is scheduled to expire Friday.

Democrats are trying to pass several pieces of legislation before a more Republican Congress is sworn in in January, including the START nuclear arms treaty with Russia, a repeal of the ban on gays and lesbians serving openly in the military, and the so-called DREAM Act, which would create a path to citizenship for young illegal immigrants.

Reid blasted the GOP letter on the Senate floor Wednesday morning, calling it part of a "cynical" and transparent" Republican strategy to "obstruct" and "delay" legislative progress while blaming the Democrats for failing to effectively govern.

"Last month, the American people issued their verdict on the Democrat's priorities," replied Senate Minority Leader Mitch McConnell, R-Kentucky. "We need to show the American people that we care more about them and their ability to pay their bills than we do about the special interests' legislative Christmas-list."