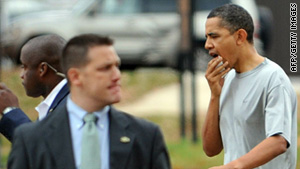 Washington (CNN) -- Apparently no good deed goes unpunished for President Barack Obama, who was trying to make sure he didn't get a flabby belly after Thanksgiving but wound up with a fat lower lip instead.

White House Press Secretary Robert Gibbs said the president received a dozen stitches after getting hit with an errant elbow during a Friday morning basketball game with White House aide Reggie Love and others at the Fort McNair military base in Washington.

The elbow belonged to Rey Decerega, who works for the Congressional Hispanic Caucus Institute. According to White House aides, Decerega went up for a shot and turned into the President, who was playing defense and accidentally got hit in the mouth.

"I learned today the president is both a tough competitor and a good sport," Decerega said in a statement released by the White House. "I enjoyed playing basketball with him this morning. I'm sure he'll be back out on the court again soon."

According to Gibbs, "After being inadvertently hit with an opposing player's elbow in the lip while playing basketball with friends and family, the president received 12 stitches today administered by the White House Medical Unit. They were done in the doctor's office located on the ground floor of the White House."

Aides said Obama was given a local anesthetic while receiving the stitches, and doctors used a smaller-than-usual filament. That increased the number of stitches needed to patch up the tear, but it made a tighter stitch so that the scar on the president's lower lip should be smaller.

Obama frequently plays basketball, works out on a daily basis, and was undoubtedly playing Friday to work off some extra Thanksgiving calories. An official White House menu showed that in addition to turkey and the usual trimmings, the first family dined Thursday on six types of pie: apple, sweet potato, pumpkin, banana cream, cherry, and huckleberry.

Asked by CNN if Decerega will be getting a presidential pardon, a top White House aide just laughed.